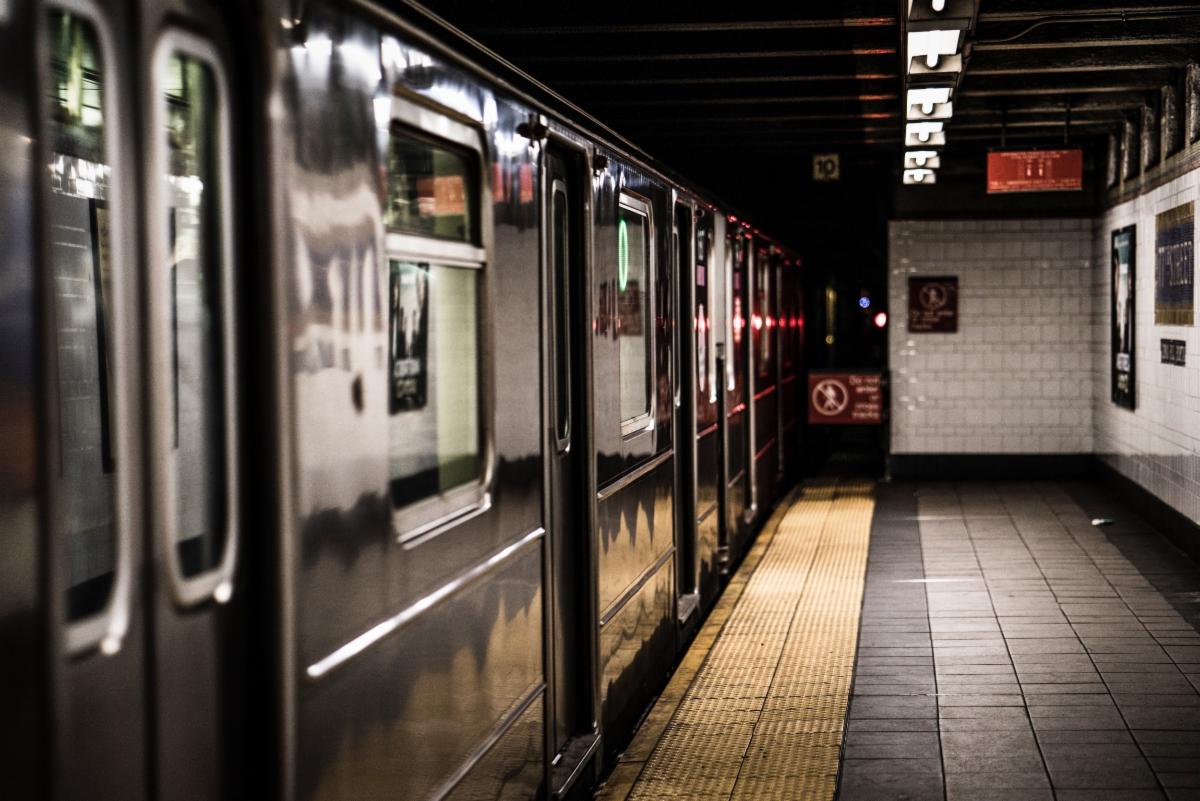 It was only Vlad’s fourth subway ride and it was definitely his best.

We were heading to our great friend Cristy’s birthday / Reunion Trip drinks moment in the West Village.

Vlad was already delighted by the adventure of the L train.

To quote Ira Gershwin, “Who could ask for anything more?”

And then––as we’d arranged by text––after the 3 stops between us, from his own stop further down the line, Cha Cha entered our subway car.

“How is this incredible thing happening?” he wondered.

“Just when things couldn’t get any better, my awesome bestie appears out of nowhere!”

Indeed, sometimes life dazzles us with its gifts.

And yet there was, of course, a price to pay.

Namely, on the return trip, Cha Cha would be getting off first.

As we neared his stop, Vlad could sense something was shifting.

When Cha Cha got up to depart and we didn’t, Vlad let out several heartfelt yelps, ones that caused the passengers around us to turn and smile in sympathy.

As Cha Cha waved goodbye from the platform, a fellow commuter sighed, “He misses his friend already.”

As Dorothy says in the Wizard of Oz when Glinda first floats off:

“My! People come and go so quickly here!”

I learned of another loss this week––one that I don’t feel at liberty to write about now or perhaps ever––except for saying that sometimes people do depart abruptly and tragically.

So many memories to re-experience and so many imagined future landmarks are going to be missed.

For now, it feels right to pivot to the positive.

Namely, Vlad and I passed another milestone this week.

I left him successfully for 3 hours to attend an engagement party, alone and uncrated.

There’s been no destruction or chaos after my 2-hour dental visit.

But this was longer and at night.

Instead, as confirmed by my zoom recording, he waited by the door for 95% of the time until I got home.

Most importantly, there were only 3 minutes of “WTF?” yelping follow by 3 hours of chill.

I sincerely wish that in my own life, I were able to operate from that same whining / total relaxation ratio.

Just imagine if we could all rise after three minutes of Complaints against the Cosmos to rest in Total Acceptance, what miracles in our lives would ensue.

The loss we experienced this week was very abrupt and deeply discordant.

It’s reminded me of something I’ve been planning to write about for a while, something I’m experiencing in my daily piano practice.

I’ve fallen deeply in love with the second of Alberto Ginastera’s Danzas Argentinas.

For me, it’s shockingly modern.

(It was composed in 1937, which demonstrates how current I am with some trends.)

While I can bluff my way sight-reading through most Mozart sonatas if I slow down the tempo, this is quite different.

With this piece, the chromatic inflections––the flirtation with dissonance and resolution––are stunning but there’s no way I can get by sight-reading them.

I have to slow down and figure out exactly what’s going on.

﻿Taken in isolation, played just by themselves, so many chords are strikingly and intentionally unpleasant.

Yet when realized as part of a flow from dissonance to harmony, it’s unspeakably gorgeous.

(If you don’t know the piece, I made a short playlist HERE with 3 of my favorite recordings on Spotify).

But here’s the thing: you’re going to have to trust me on all the above.

When you hear Lang Lang or Martha Argerich or Daniel Barenboim play the piece––and you really should––everything resolves beautifully and swiftly, one flowing moment after the other.

It’s only when you’re home practicing and figuring out one of those big dissonant chords note by note that you exclaim “WTF––does he really mean this?”

While you’re learning the piece, however, the tension is left hanging in the air for uncomfortable moments while you figure the notes out.

The music only happens when there’s fluidity, when it truly lies under your hands, allowing you to move seamlessly on to the next moment.

It’s only then that the dissonance makes sense, that it reveals its meaning, part of which is that it’s merely temporary and part of it is that tension and discomfort are absolutely necessary for great beauty.

There were other losses and wins these week, both major and minor.

I signed contracts for a new project I’m very excited to create and closed out an LLC for one that didn’t work.

I broke a fragile glass candlestick and when I reordered a replacement, West Elm mysteriously sent me a floating glass frame instead.

And Vlad discovered that our morning baseball field actually has a fountain in the dugout, basically granting him unlimited free bottle service at The Club every morning.

To paraphrase Dorothy, things do indeed come and go here in surprising and swift ways.

It’s impossible not to be delighted when suddenly your friend appears out of nowhere on the L train, and even harder not to grieve loudly when he exits before you.

And there are days when right before yet another meeting, you hear someone you knew rather well has suddenly departed.

Indeed, these constant comings and goings are the greatest of mysteries.

Speaking of which, one of the best things about that Danza is its ending.

Quite unexpectedly, just as we’re anticipating a harmonic conclusion in the tonic key, instead Ginastera gives us a final atonal chord.

It’s a very striking choice to end with uncertainty, rather than completion.

It feels like there should be something next coming…and the truth is, there always is…