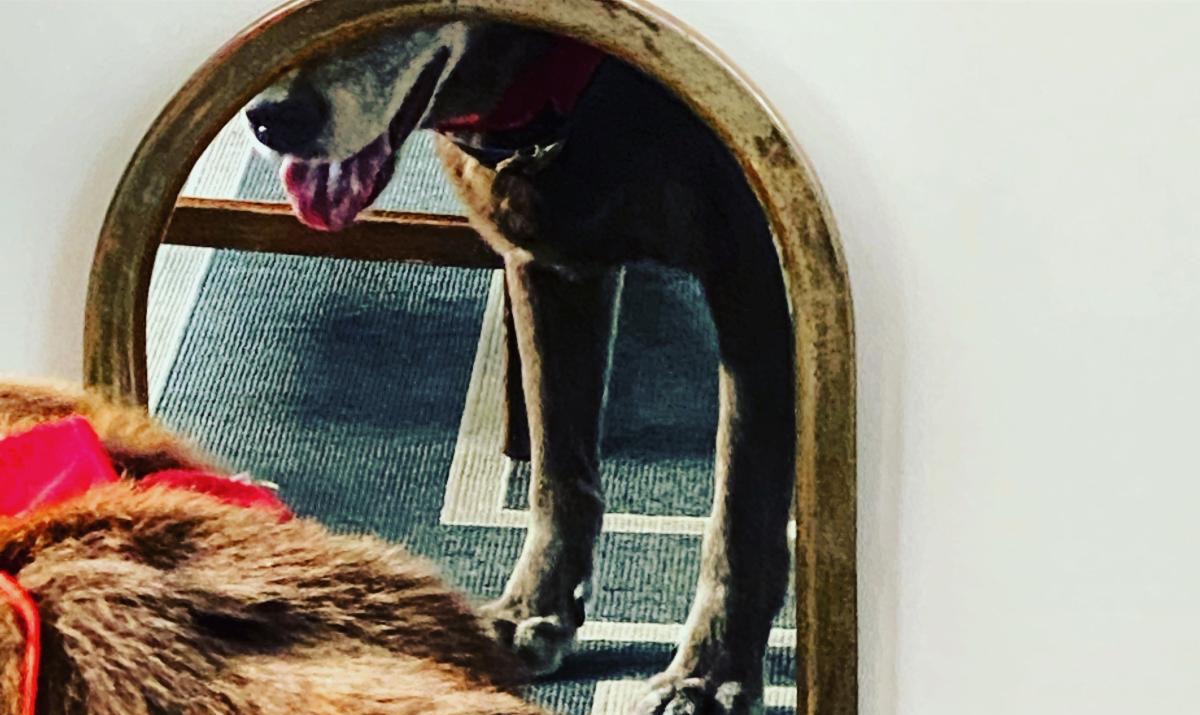 (although it probably should)…

But one of my greatest innovations is installing Dog Mirrors in my apartment.

Belle was just so beautiful that I felt it was a terrible shame she couldn’t ever see herself.

Thus, I did the only logical thing.

I placed mirrors at her level in various rooms so that she could admire her beauty whenever she liked.

#ProblemSolved, albeit perhaps an imaginary one.

And when I recorded Vlad’s first entrance into our home, the end of his self tour is a hilarious moment where he spies himself in the mirror.

He’s startled for a millisecond and then completely moves on with his life.

Vlad and I have been together for six months and still I alternate between moments of thinking he’s basically the same size and others of utter astonishment at how big he’s gotten.

The mirror thus also serves as a scale for how much he’s grown.

So does his crate which I initially divided to make appropriately cozy and which he now fills.

Or the red chair he poses in (when he’s not occasionally gnawing at its upholstery).

All of this has led to many thoughts on GROWTH, which is the subject of this months’ new meditation I’m recording this week.

For years I taught an advanced yoga class in NYC entitled Cosmic Play.

It was 2 hours long, something that’s unheard of these days.

Teaching at that level and for that length was both enormously challenging and rewarding.

Anyone taking the class wanted an experience that would––pun absolutely unavoidable––stretch them.

Showing up at a 2-hour advanced class meant they craved rarely taught difficult poses or new and complicated variations of familiar ones.

And yet I found that the most challenging thing for students was almost always when I set them free.

After choreographing their every move––and in a way, their every breath––I’d sometimes cut them loose for a few minutes.

“Why don’t you play around with those shapes and patterns for a bit and then we’ll regroup,” I’d offer.

Of course there were some students who dove headlong into the experience, thriving in a moment of physical creative self-expression.

More often, people were confused and unable to process their newfound, unexpected freedom.

Even when the direction is “Why don’t you just put your foot behind your head?” oddly it’s often easier to be told what to do than to make your own decisions.

That’s one of the reasons why growth is often so challenging.

New territory means we just might have to think for ourselves.

And as much as we say that’s what we want, when it’s actually offered to us, it can be overwhelming.

He offers invaluable insights about how our expectations of growth are skewed.

We expect the immediate meteoric rise, denying our required stay in The Valley of Disappointment.

He argues well for The Power of Tiny Gains, that getting just a steady 1% better every day for a year produces tremendous results.

Embracing that concept has helped me so much and yet…

For example, Chinese moso bamboo can grow 3 feet in 24 hours.

Unexpected heartaches, tragedies, and sudden losses can also force us far beyond our measure in record time.

And between Fall and Spring, in the few moments your back is turned, puppies can transform.

I’m a proud member of the Dramatist Guild and as I write this it’s the last day of its April “End of Play” event.

The rules are simple:

Pens up on April 1st.

Pens down on April 30th.

The vision / invitation is that you will complete a new play or revise an old one.

I can’t tell, however, whether I’ve been a superb or delinquent participant.

You see, every single day without fail, I’ve attended one of the Zoom Silent Writing sessions.

A few moderators have invited participants to briefly describe what they’re working on and what their goals are, butfor the most part it’sjust a bunch of writers silently sitting at their computers, typing (and not typing) in unison.

The sessions are 2 hours but I’ve made up my own rule: I only need to attend for 13 very focused minutes for it to “count.”

I had to unearth the correct draft of a half-baked play that I’ve left hovering in limbo for a few years.

In fact, since it kept crashing, I actually needed to update my Final Draft software if I even hoped to read what I’d written in the Dark Ages of 2014.

I’ve grown so much since I last looked at this play, I wondered if we’d even recognize each other, or whether it would be like a reunion with a college roommate where you pick up the conversational thread from decades ago as though barely an hour had passed.

And yet I also admit to many moments of feeling the terror of the blank page, of unwritten scenes and plot problems that have been left as gaping holes for nearly a decade.

Like my former students in Cosmic Play, it’s a little unnerving to be left with a canvas that’s not exactly emptybut that has so much white space, so much to be filled in.

That moment of anticipation before the curtain rises…

And if not, don’t you think there should be?

In the spirit of Growth, I’m going to continue working on the play every day without fail for as long as it takes.

(That means I will put in my required daily 13-minute minimum for months / years / centuries.)

It’s going to become one of my Atomic Habits, a testament to the power of simply Showing Up.

It may result in one minute of dialogue a day, or perhaps inspiration may strike and it will rise up like a bamboo forest.

Incidentally, this play is a universe away from the last piece of theater I co-created which was capital “S” Serious.

In fact, it’s a comedic farce.

All the elements are there:

Mistaken identities and sudden surprises and reversals of fortune.

Things get incredibly complicated but everything ends very well.

And there’s not just one, but multiple weddings at the end.

Finally, as I did some genre research during my 13 focused minutes, I discovered a new favorite definition of farce:

Everything that happens could actually happen, but it all happens a lot faster than we expect.

That’s, in fact, what creates the comedy.

With so much velocity, you don’t have time to be afraid of your freedom.

Unobstructed, as with Vlad, growth (and comedy) just happen, constantly and mysteriously at the same time.

It’s almost like those stop motion films of plants growing.

Something that’s invisible to the eye in real life suddenly reveals itself as miraculous.

This Spring (and always), I wish that kind of growth for all of us.