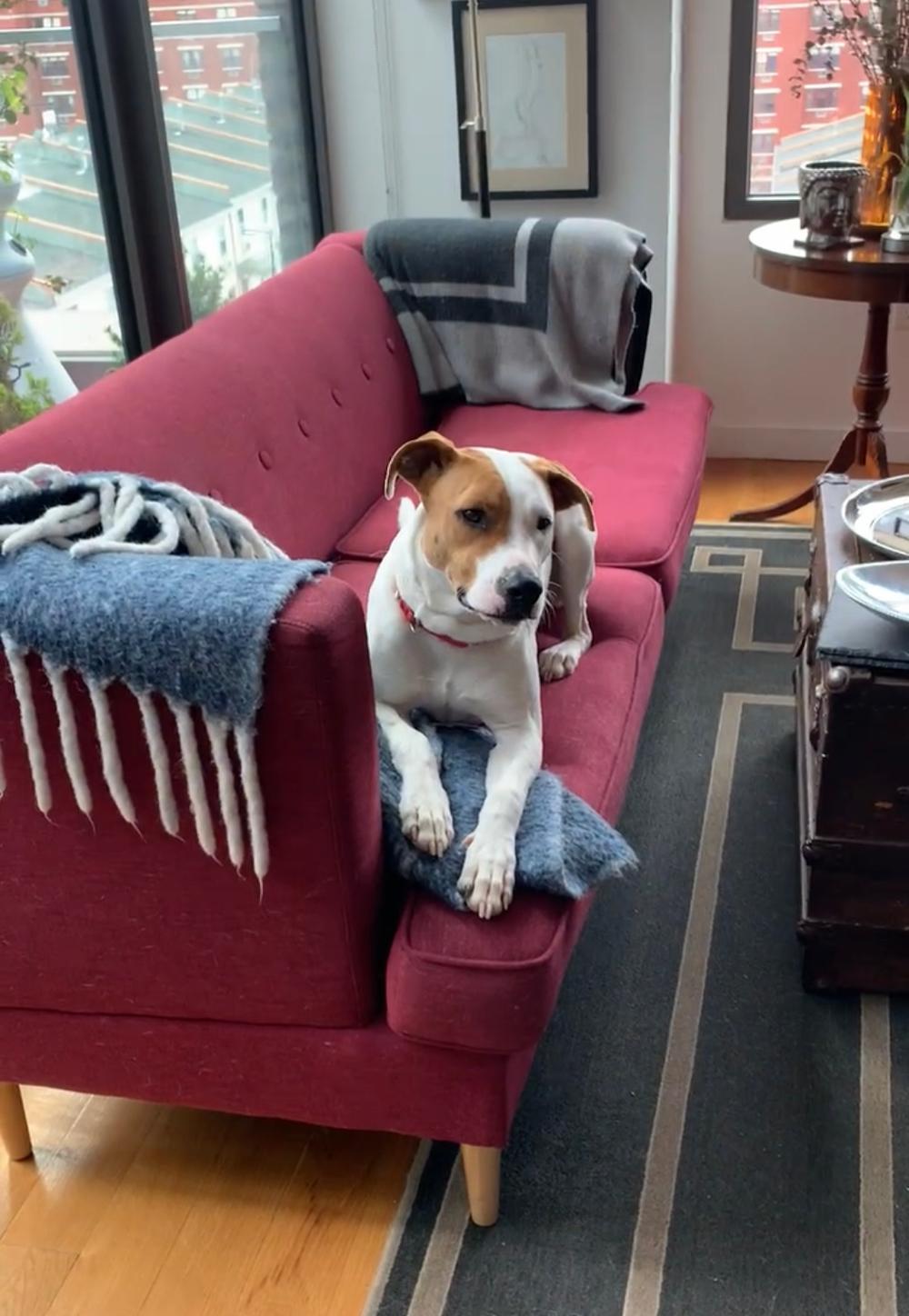 Better Than A Dislocated Shoulder

There’s a terrific Rumi verse which is the antithesis of dog training.

“Let yourself be silently drawn
by the strange pull of what you really love.
It will not lead you astray.”

Great poetry but in my situation actually very bad advice.

And yet, given that he’s an extremely athletic combination of American Pit Bull Terrier and various working dogs, the more he grows, being “silently drawn” by his “strange pull” can easily dislocate one’s shoulder.

Thus, I’m extraordinarily happy we met with his trainer this week.

Thank you Embark for his Dog DNA Analysis!

Echoing last week’s letter regarding what might be missed in canine and human interactions, I received a startling text from my new cleaning lady.

She and her sister have worked for us a few times and done an excellent job.

They show up at 6:45 am and––since their English is nearly non-existent––we exchange whatever minor new info is needed via Google Translate.

After that Vlad and I are off to the ballpark.

It’s better for everyone if we’re out of their hair, particularly since Vlad has an increasingly complicated relationship with our vacuum cleaner.

Sometimes he treats it like a scary alien; other times, captivated by its strange sounds and movement, he just wants to play with it.

Although I’ve already paid them in advance, I calculate our return from the baseball field to coincide with their approximate departure.

Sure enough, we ran into them in front of the building.

That’s when our new cleaning lady showed me this text which I hadn’t yet seen.

Of course I offered to take them back up so that she could retrieve her hearing aid.

She just shook her head saying it was alright and “Next time…next time.”

We did a few rounds of this back and forth.

I was incredulous that it wasn’t worth the short trip back upstairs for something so vital as a hearing aid.

She was adamant and very eager to head towards the subway for her next job, so I accepted her decision and bid them farewell.

During my reentry into the lobby and elevator ride up, I contemplated how it could have been that I’d somehow missed that my 30 year-old cleaning lady had a hearing problem.

Maybe it wasn’t just the language barrier that stood in the way of communication?

During the course of the elevator ride up, I revised her entire life story in my mind.

I wondered what unique challenges she’d faced as a deaf immigrant.

Over seven flights, in my mind, I outlined an Oscar-worthy biopic.

Then, once Vlad and I arrived and I reentered my office, it all made sense.

The “hearing aid” that she’d left charging were actually her iPhone earbuds.

Google Translate had significantly upped the stakes in the story.

Rather than a unique medical device costing thousand of dollars, until she was back again, she could probably borrow some earphones from her sister.

How ironic when the act of listening itself gets lost in translation.

Our session with Vlad’s trainer was amazing.

Although I pride myself on someone who’s “good with dogs,” I learned so much.

More particularly, I learned so much about listening specifically to Vlad.

There were some very practical take-aways (including how we could utilize a much longer leash), but most importantly I was struck by the guiding principles of what she taught.

Namely, this dance between sometimes walking away and sometimes rewarding with treats.

It worked wonders to eliminate his pulling and at an extraordinarily rapid rate.

Once I understood things from this new perspective (ie, his perspective) it was so much easier for both of us.

And I couldn’t help but be reminded of the core principles from the yoga sutras regarding how one should approach the physical practice:

It’s translated lots of ways from the Sanskrit but essentially it always boils down to the poses having a combination of ease and effort, strong yet relaxed.

For decades I’ve found it essential when teaching yoga but honestly it’s wisely applied to all aspects of living, to all facets of being human.

I’ve had second-hand business dealings with two guys who I’m pretty sure have never met even though they have similar educational backgrounds, probably travel in the same circles, and physically they even look a bit alike.

Guy #1 went to polite but surprising lengths to secure a refund when an online product in a friend’s course wasn’t exactly what he thought was promised.

Given what his hourly billing rate is, the refund was equivalent to about 47 seconds of his time.

(I’m not kidding about that math.)

Guy #2 was oblivious to a jaw-dropping moment during a potential partnership meeting I’m told, when he said something that more of less indicated that he believed all contracts were more or less just suggestions.

In other words, forget about what’s signed on the paper; everything is fluid and up for constant renegotiation.

The two form opposite sides of the same coin.

One could only uphold the principle that “a deal’s a deal.”

The other that “the only constant is change.”

The concept of “Sthira & Sukham” tells us, however, that both are necessary.

It’s impossible to experience peace without a combination of steadiness and flexibility, of standing our ground AND going with the flow.

Indeed, ultimately they will simply collapse from imbalance.

Despite its rapid successes, there is a challenge to working this way with Vlad.

Namely, that getting anyway takes a little (or a lot) longer.

When he pulls, I’m learning to loosen the leash, change directions, and continue so that follows me.

There’s a small treat reward for him when his cute little nose emerges just past my knee.

We continue in the new direction until he moves ahead of me again.

Then we repeat the process.

Fortunately, our roof is practically a labyrinth of possible pathways.

The trainer enthusiastically declared that it’s the perfect training ground for him to learn pulling doesn’t work, and for me to understand when to switch to directions and when to reward.

Valuable lessons which translate into so many areas of my life.

(Perhaps yours as well.)

And, in just a few days, I can see that Vlad’s baseline heeling is just so much better.

And maybe so am I.