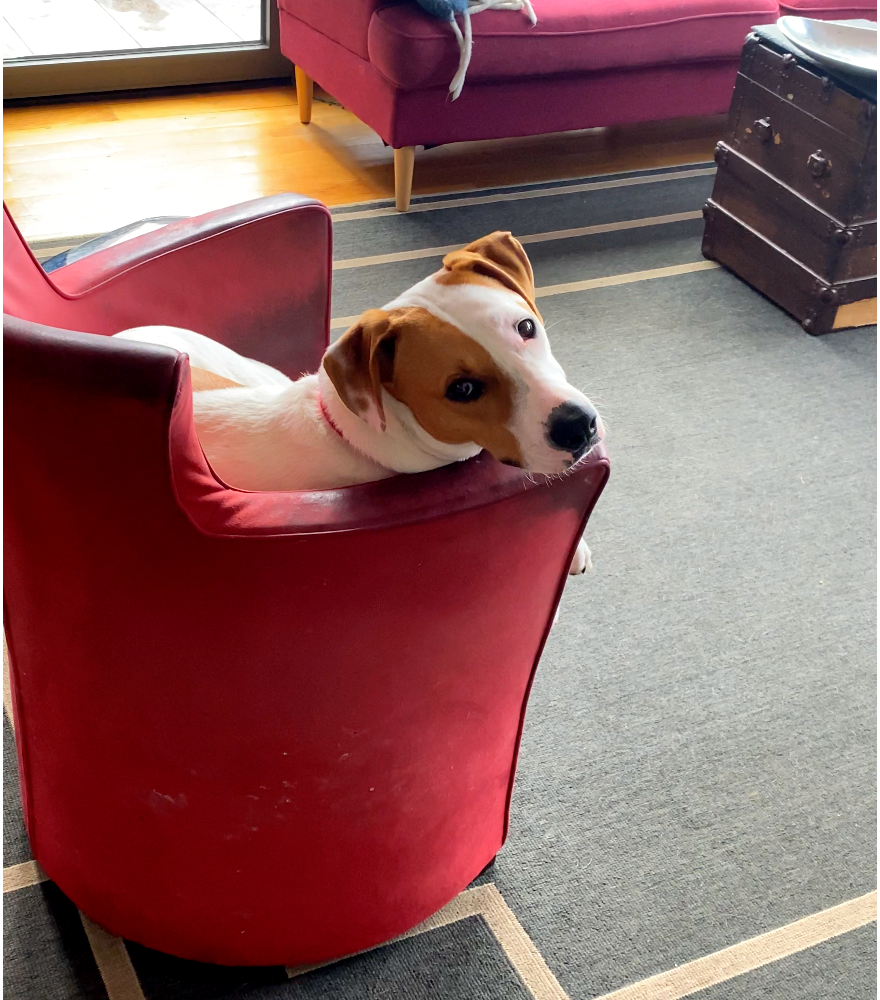 Something fundamental has shifted.

And not necessarily in a good way.

Or, more accurately, not in a way that makes my life the least bit easier.

And while “Puppy Rebellion” may sound awfully cute, although I’ve yet to see a single episode of Euphoria, trust me that it’s definitely as unpleasant and nerve-racking as dealing with a real-life adolescent.

﻿Here’s what happened this week…

My apartment building is a mammoth structure that occupies an entire city block.

It’s one corner of an intersection that includes an elementary school, a baseball field, and a mysterious one-story unidentified warehouse without windows that seems vaguely connected to the NYC fire department (or the X-files).

Every single day for the last six months––except for two mornings of torrential rain––Vlad and I have shown up on the baseball fieldat 7 am.

Vlad alternates between frolicking with his friends and passionate games of fetch.

(On a positive note, he’s gotten much, much better at returning the ball).

Truly, everything he wants in the world is right there.

Most often it’s an early morning puppy pack centered around his best friend Malibu, Henry (who bit his ear at his birthday party), Jordi (who loves to wrestle), Chase (his only rival for an Olympian-level love of fetch), and a beautiful German Shepherd named Luna.

And yet this Tuesday, for reasons known only to him, Vlad decided mid-outing to climb the steps at one of the access points, look back at everyone calling his name, and then scamper toward the street exit.

First, he decided to jump up and sit on two different park benches, right next to strangers who were watching the dogs at play.

He casually leaned into them as though curious to see who they were texting on their iPhones.

Vlad was quickly nabbed before he left the grounds and brought back to his pack.

Returning to the field, however, almost instantaneously he did it again, this second time actually leaving the baseball field area entirely.

Suddenly, Vlad was not only running off, but crossing through an intersection.

Fortunately, the traffic is a single-lane and mostly pretty slow, particularly at that hour.

We were lucky that most drivers were already on alert since the street is littered with elementary school kids sporting Disney backpacks, holding hands with their parents before being dropped off.

Even so, Vlad ran directly in front of a school bus which (thank God) saw him coming and stopped in plenty of time.

Unfazed, my little dog swiftly arrived at his destination, sitting down directly in front of our building’s main entrance, eagerly waiting to be let back in, a madcap grin on his face.

For him, a newly invented game, a triumphant morning adventure.

﻿For me, a bracing near-death experience.

According to the American Kennel Club, this kind of thing, while horrifying, is also apparently perfectly normal behavior:

“Like humans, dogs go through a rebellious ‘teenager’ phase

During this time, they’ll often test their owners,

seeing what they can get away with.”

In other words, it’s all about boundaries.

Apparently, my job is to be firm and consistent with establishing and maintaining those boundaries while right now, Vlad seems biologically compelled to test them.

And while the AKC tries to reassure with

“Be patient! They’ll grow out of it.”

Those words are less than comforting as your puppy is blithely crossing a busy intersection.

I’ve drawn the above Tarot Card three or four times in the last two weeks.

There are, of course, multiple interpretations of its meaning––“Taking a Stand,” “Defending Your Ground,” “Almost There: Endurance Guarantees Success”––but my favorite reader defines it as “Boundaries and Declarations.”

“Seven of Wands is a card for boundaries,
declaring who you are,
and a card for sticking up for yourself and what’s right.”

In many ways, it seems I’ve had to do that a lot lately.

For example, last week when renegotiating a contract where I had to gently remind the other party about the laws of the state of New York.

Those kinds of boundaries tend to be easier to define and uphold.

It’s helpful when there’s real clarity around facts (and the law on your side).

It’s usually only when there’s a greater emotional undercurrent that things get tricky.

Precision flies out the window and fuzziness sets in.

The waters can get very murky, very fast.

﻿All of this reminds me of another card, the Octopus, which I also drew this week.

It always reminds me of a particular past relationship from a lifetime ago with someone who had––as per the Octopus description––“a wonderfully perceptive mind, paired with a lack of healthy boundaries.”

One of the turning points in that interpersonal narrative was a moment in a coffee shop where I simply said, “No.”

And I mean that quite literally.

“No” as a complete sentence, full stop.

“No” followed by a long and difficult awkward silence.

It was a supremely intense moment and an amazing one.

Again, as my favorite tarot reader says in her discussion of the Seven of Wands:

“Learning the art of saying ‘no,’
especially doing so without explaining yourself,
is an excellent, empowering thing.”

And indeed it was.

Mind you, it was enormously challenging not to fill the void, to let the word “No” just sit there, absolute and final.

Yet I realized that anything I said afterward would have watered it down.

Further dialogue would have eroded the boundary I’d just erected.

It was strongest as a simple, one-word declarative statement.

﻿Indeed, this moment really proved that sometimes the less said, the better.

The maddening thing is that Vlad’s rebellion seems purely hormonal, not situational.

He doesn’t really want to escape from me or Malibu or his pack––he’s running right back home, after all.

In fact, for 90% of the day, if he’s not sleeping, he follows me around from room to room.

And actually, perhaps my favorite moment of every day is when he leaps onto the bed when I start playing the piano.

Sometimes, he even likes to sing along with the music.

Thus, his need to rebel, to be a bit of a bad boy, seems perplexing.

In some ways, it reminds me of The Wild One where a young, leather-jacketed Brando–– predating Elvis and James Dean––entirely defines the motorcycle biker rebel.

It’s the inedible, iconic moment when someone asks his character, Johnny Strabler:

“Hey, Johnny, what are you rebelling against?”

﻿In the same way, Vlad’s rebellion is both as arbitrary as it is authentic.

I’m very reluctant to risk another escape from the baseball field.

Thus, I’m deep into my research about Puppy Rebellion.

I have calls out to three trainers.

Plus I purchased several Puppy Puzzles from Amazon––something that’s supposed to help alleviate boredom and provide mental stimulation––all of which he’s incredibly good, maybe even TOO good, at solving.

Perhaps the most challenging part of it all is that in the most difficult moments a certain emotional mastery was required from me.

In the same way thatyou have to maintain the silence after asserting a personal boundary by saying “No,” you cannot express your fear or frustration at your runaway dog.

It requires an enormous kind of detachment not to yell “Never Do That Again!” but instead to calmly welcome him back.

Some future caution is definitely required, but I have no doubt we’ll figure this out.

Even so, with as athletic and spirited a puppy as Vlad, it’s pretty much going to be devising a graduate-level program in setting and maintaining boundaries.

Yet as I’ve learned in my own life, achieving that is essential for healthy relationships.

Sometimes, particularly when school buses are involved, it’s even a matter of life and death.

And sometimes––proven by the fact that Vlad’s crate is almost never shut these days; it’s just his private room where he can hang out and come and go as he pleases––boundaries can truly transform.

Instead of prisons, held properly, boundaries can become our greatest friends.

P.S. As proof of the last paragraphs, one more photo of Vlad.