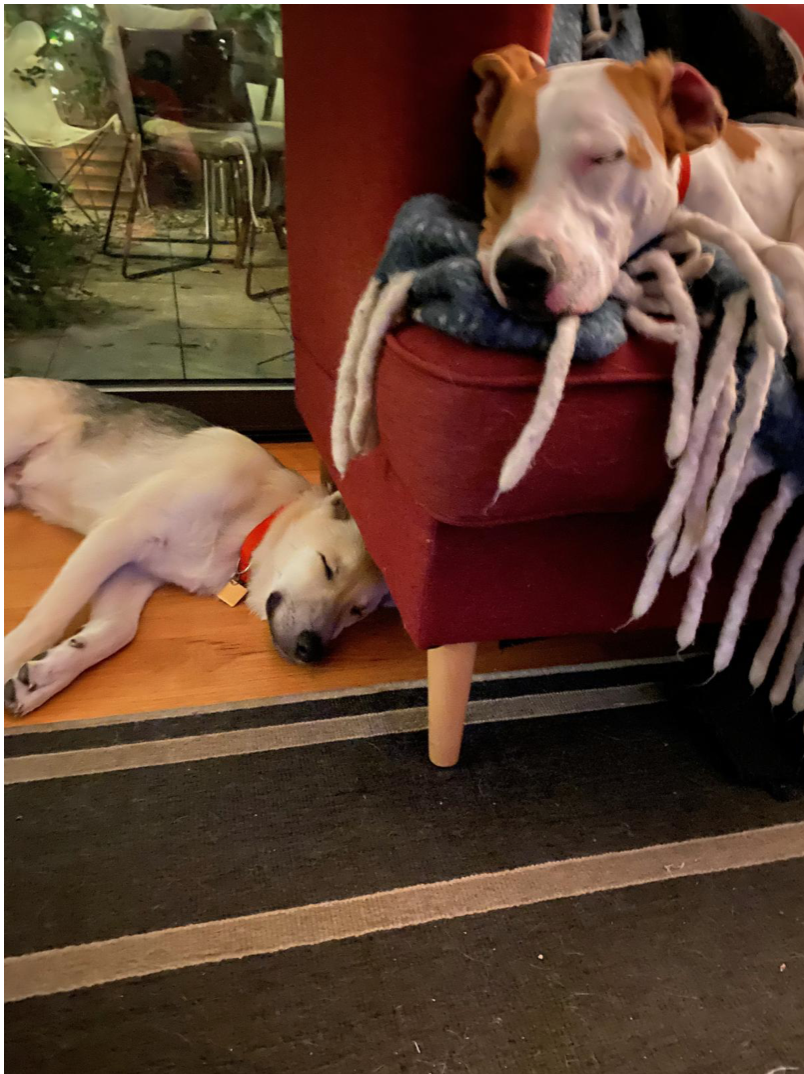 I use Angel, Animal Spirit, Tarot, and Kabbalah decks.

To be honest, I’ll accept helpful guidance from the Universe however I can get it.

Whenever I draw the Earthworm Animal Spirit card, though, I just shake my head and sigh.

I want Eagles and Hawks, something that soars…or Whales or Elephants, something grand and inspirational.

Who really wants guidance from an earthworm?

And yet, since I’m still nursing my puppy-joy hangover from Malibu’s 3-night sleepover last weekend, I’ve had some new insights about the earthworm’s lesson for us.

Specifically, some new aspects of what the earthworm represents: maintaining Beginner’s Mind.

Vlad and Malibu had an absolute blast last weekend.

And at the same time, they each learned a lot from each other.

For example, Malibu taught Vlad that rather than using one of the bowls, it’s much more fun to jump, place your paws on the metal basin, and drink directly from the dog park fountain.

And Vlad coached Malibu around his hesitancy with Tug-of-War, instructing him in and enhancing his appreciation for the finer points of the game.

With a puppy, everything is new.

They are hardwired to be delighted by the constant freshness of experience.

Every person walking around the corner could become a best friend.

Every empty paper bag might contain something delicious to eat.

Life is basically an assembly line of delightful first-time experiences.

Indeed, part of the new pet parent’s job is exposing them to as much as possible in their early development.

Simultaneously, another part of that job is being extremely patient toward their learning process, something we rarely are for ourselves.

In countless workshops and classes and even these newsletters, I’ve quoted Jack Kornfield’s words from A Path With Heart about meditation training.

The need for this kind of patience reaches far beyond just meditation practice, however.

It also extends to being patient with ourselves whenever we attempt to make any meaningful changes in our lives.

Patience not just in the mastering of the material or experiences we are learning.

I’m specifically referring to the aftermath of our learning, that fuzzy period where we step into unfamiliar realities.

Interestingly, this awareness is something that’s rarely taught.

I find this particularly true around positive changes.

No one ever warns us about the jarring side effects of getting exactly what we want.

Unfortunately, we’re often more prepared for negative possibilities than we are for our hard-won successes or the unexpected good.

﻿Right after college I attended a creative arts career workshop weekend that was truly amazing.

The leaders were wise and experienced and repeated many times that after the workshop we would feel euphoric and empowered, ready to charge brilliantly ahead into the life of our dreams.

Yet they also warned that there would be an inevitable moment of crashing, if not outright breakdown soon after.

And sure enough, I experienced both phenomena completely as predicted.

I remind myself and my coaching clients of this all the time.

After all, Newton’s third law is: For every action, there is an equal and opposite reaction.

Thus, we have to account for the consequences of positive change.

It’s why lottery winners (or pop stars) despite their best intentions often squander everything.

They are simply not energetically prepared to suddenly handle so much more money and return to where they were before, or often land in lesser circumstances.

Or, to use another dramatic example, in Shawshank Redemption, after 40 years in prison, Morgan Freeman is finally released from prison.

He has no idea what to do with himself and even considers returning to crime.

My friend Joan Sotkin––a wonderful transformation teacher––has a term for how it applies in more everyday life circumstances.

She refers to our discomfort with newness as we make changes in our lives as the “Moving Stupids.”

This is a phenomenon we’ve all experienced.

Not just moving but any significant change in our environment or circumstances disorients us.

We keep reaching for light switches in the wrong places or missing our new subway stop.

Again, it’s worth noting that this accompanies positive changes.

Something is better in our lives and yet things somehow feel off.

We finally got the thing we wanted and after a burst of happiness, we’re not sure why we feel uneasy.

I’ve been feeling that this week around some career improvements regarding one project.

Thanks to some new tech hires and some strategic planning, where once I was continuously struggling with new last-minute deadlines, I’m now not only caught up…I’m actually ahead of the game.

It’s exactly what I wanted…and yet it nonetheless feels a little weird.

I’m used to having that dull, nagging feeling of a perpetual deadline hanging overhead.

I really like the new reality…and it’s very disorienting.

I’m determined, however, that I won’t needlessly recreate that familiar but unwanted feeling of looming chaos.

And that’s largely because I understand this phenomenon on a deep level.

In fact, I’ve even relabeled it as yet another aspect of Beginner’s Mind (aka earthworm wisdom).

Growing up, my siblings and I all took swimming lessons.

I never thought about it until now but there was a level called “Advanced Beginners.”

There’s almost an oxymoron in the phrase “Advanced Beginners.”

I googled it recently.

The first thing that comes up is from a software engineer named Robert Heaton who uses the term for all his branding.

“An advanced beginner is someone who has learned a lot but doesn’t know what to do next.”

Doesn’t that sound exactly right for those moments when we’ve made a major or minor quantum leap and then brain fog sets in?

Rather than misinterpreting those moments, I’m trying to remember and respect that part of the growth process.

Given how much Vlad’s teaching me these days, I anticipate I will keep growing in wisdom…and then experience new levels of confusion about what to do next.

I’m thankful, though, that Vlad and Malibu are the most patient of teachers and have complete trust they’ll bear with me.

I wish the same for you, that you keep moving forward (whether like an earthworm or an eagle), always growing, always being an “advanced beginner,” and always experiencing a touch of discomfort as you step into new, ever-improved realities.