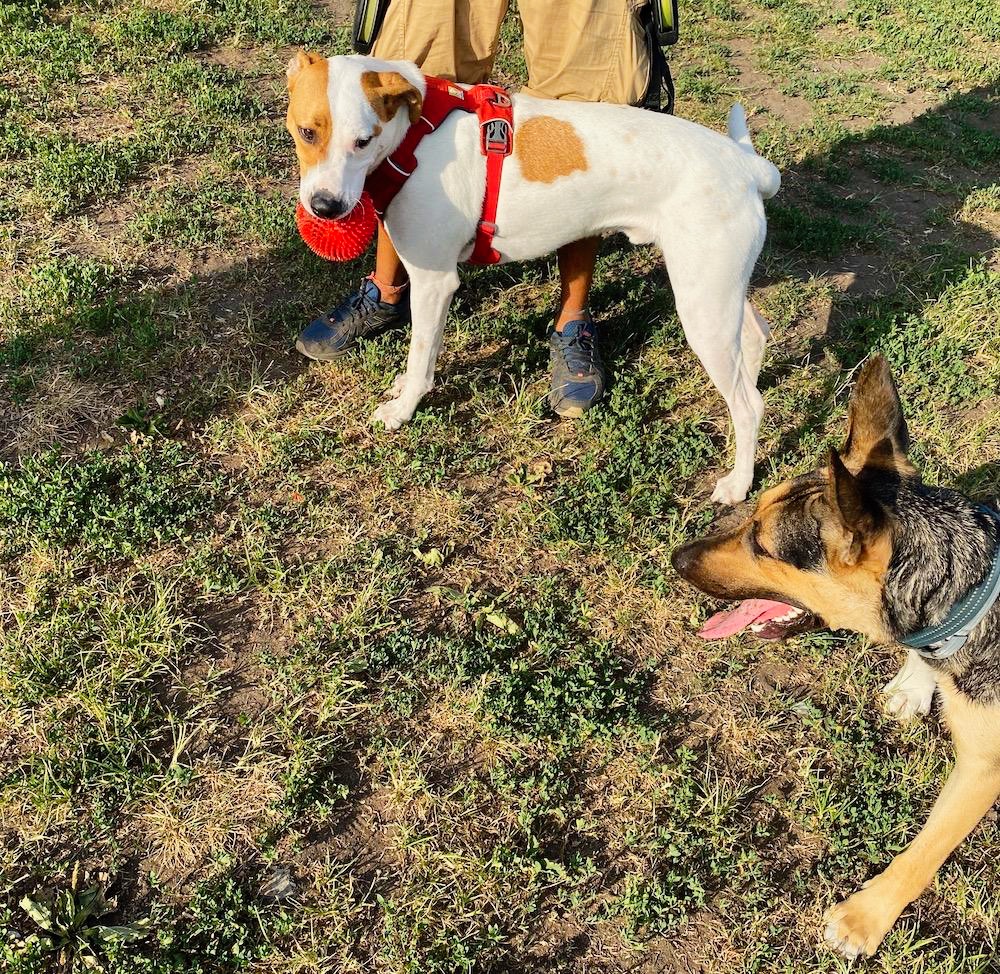 Caught in a Summer Love Triangle

Unwittingly, I find myself part of an ever-shifting love triangle.

Allow me to explain.

When Vlad and I arrive on the baseball field each morning, two dogs find us immediately.

It’s entirely because I’m the guy with four spiked squeaky balls in my backpack, ie. I’m “The Dog Dad with the Good Toys.”

Miku, a young Weimaraner and a master of stealth, accepts any ball I toss out to her.

Throughout the morning, in fact, Miku will grab any ball that’s left unattended for a nanosecond.

She just doesn’t care about anything other than opportunity and conquest.

Chase––a mix of German Shepherd and I don’t know what, see photo below––and Vlad, however, have developed this thing between them.

Each day, through a process known only to them, one squeak toy immediately becomes the chosen ball.

No other ball matters.

Some days it’s the red ball.

Others, it’s the green.

Or the blue…or the yellow.

The universe collapses in on itself.

Nothing else matters but that one ball.

And once they have it, they are VERY unwilling to give it up.

Since I came out in the last newsletter as Non-Chronological™, I’ve received a tremendous amount of support.

So many people wrote to me sharing how much they identified.

I was very moved and I thank everyone.

And I’m also happy to report that this was one of the best––if not THE best––birthdays I’ve ever had.

Most importantly, I want to share that it’s perfectly acceptable to incorporate these concepts into your own celebration.

For example, it’s fantastic to have, as I did, a dozen people sing “Happy Non-Chronological Birthday to You.”

It only adds six extra syllables, yet at the same time it takes away decades.

Anyway, all of this––my being Non-Chronological™ and Vlad being red ball obsessed––has been making me think a lot about Limits.

(And…it’s the theme of next week’s July Meditation of the Month––at least that’s what I’m planning to record in this time-space illusion we call “Reality.”)

I love sharing nuggets about the benefits of being Non-Chronological™.

Here’s one of my favorite examples.

For example, in the 19th century, people had incredible fears around the limits of train travel.

Imagine a time when no one had ever traveled faster than, at most, 40 mph while racing on horseback.

As trains got faster, people were genuinely worried if the human body could withstand such greater speed.

In fact, many prominent scientists of the time were convinced that higher speeds would result in rattled brains, temporary madness, and even suicide attempts.

Now that planes travel an average of 500 m.p.h. we know that––despite rising rudeness to flight attendants––this was a false limitation.

Yet at the time, fears around transcending this speed barrier were very real.

Exceeding the perceived limit seemed both dangerous and impossible.

Fortunately, we overcame that to emerge into a world beyond the possibilities of Full Gallop.

I find this example even more powerful and have often shared it in courses and workshops.

Until quite recently, throughout human history, people were convinced that no one could run a 4-minute mile.

This was a “fact” about human physiology, one like being unable to fly or breathing underwater, that we simply had to accept.

In the 1940s, someone almost crossed that 4-minute barrier, missing by just one second.

For almost a decade, that record stood as the new limit.

It was only in 1954, that Roger Bannister shaved 2 seconds off that time.

And with that barrier broken, the limitation was permanently dissolved.

Within a few months, two other runners accomplished the same feat.

Now, the current world record is even 17 seconds less than Bannister’s triumph.

More importantly, over 1,4000 people have now run miles under 4 minutes, something that for centuries was thought impossible.

Certainly the human body did not undergo an evolutionary leap in this short period.

Even if training techniques were significantly improved, there’s only one way to account for this phenomenon:

A limit was utterly unbreakable.

That is, until someone broke it.

I remember well how a college friend’s super-successful NYC parents––lets call them “the Zees”––became unofficial mentors to me after graduation.

One of my favorite stories was from the father who, after graduating from college yet completely unsure of what career path to take, decided he had to buckle down.

You see, brimming with youthful confidence, Mr. Zee was convinced he could do anything.

At the same time, he also assumed that this must mean he was afflicted with massive hubris, perhaps that he was even slightly delusional.

Committed to being realistic, that he must face the cold, brutal truth that not all roads were open to him,he subjected himself to the most rigorous aptitude and career testinghe could find.

The results, however, surprised him.

The testers brought him in for a face-to-face conference.

He braced himself to hear what roads were permanently closed to him in life.

“It turns out, Mr. Zee” they whispered,
“that you actually CAN do anything.”

How ironic that, determined to find his boundaries, my friend’s father discovered instead that he was more or less limitless.

Even so, that amazing news may not not necessarily have been particularly comforting.

After all, the blank page or the blank canvas can be incredibly daunting.

Just imagine how much more so, no matter where we are in life, that when we step out of our comfort zone, the width and breadth of the possibilities before us is astonishingly vast.

Such great levels of freedom can indeed be truly terrifying.

Please note, I’m not against all limits.

In fact, sometimes they enhance things, even if they are not always necessary.

Robert Frost, for example, believed so strongly in rhymed poetry that he famously said:

“I would just as soon
write free verse as
play tennis with the net down.”

After all, the challenge is part of the adventure.

Sometimes it even adds to the fun.

And, as I say, some limits are truly necessary.

For example, this February when Vlad revealed it was effortless for him to jump to the top of the planter pedestal in our building’s ninth-floor rooftop dog park, I was both proud and horrified.

I took it upon myself to immediately install a mini-fence circling its top which thus far has succeeded in limiting Vlad’s aerial exploits.

I.E. Just because you can jump sky-high and close to the edge of oblivion doesn’t mean you always should.

More often, though, our limitations rather than protecting us, have the power to box us in unnecessarily.

For Vlad and Chase, circling around each other, the entire game of Fetch is suddenly suspended.

They’ve needlessly limited themselves to only one ball when there are actually four available.

(Well, to be honest three, since Miku is always purloining one.)

This morning, however, there was an Epic Victory I must report.

A quiet one, perhaps, yet nonetheless spectacular.

This morning, at first, the red ball was the only ball in the world that mattered.

I’m not sure why or how it happened but Chase suddenly decided that the blue ball might be worth his time.

And, after Miku stole the red ball, Vlad considered that the green one might be an equally fun possibility.

Limits were redefined and expanded.

The canine equivalent of the four-minute mile was broken.

Suddenly, anything was possible.

That’s what I wish for us all always.

Remember: We’re only as stuck as we believe ourselves to be.

Expanding beyond our limits is possible at any time.

After all, if Vlad, Chase and Miku can do it, maybe so can we…