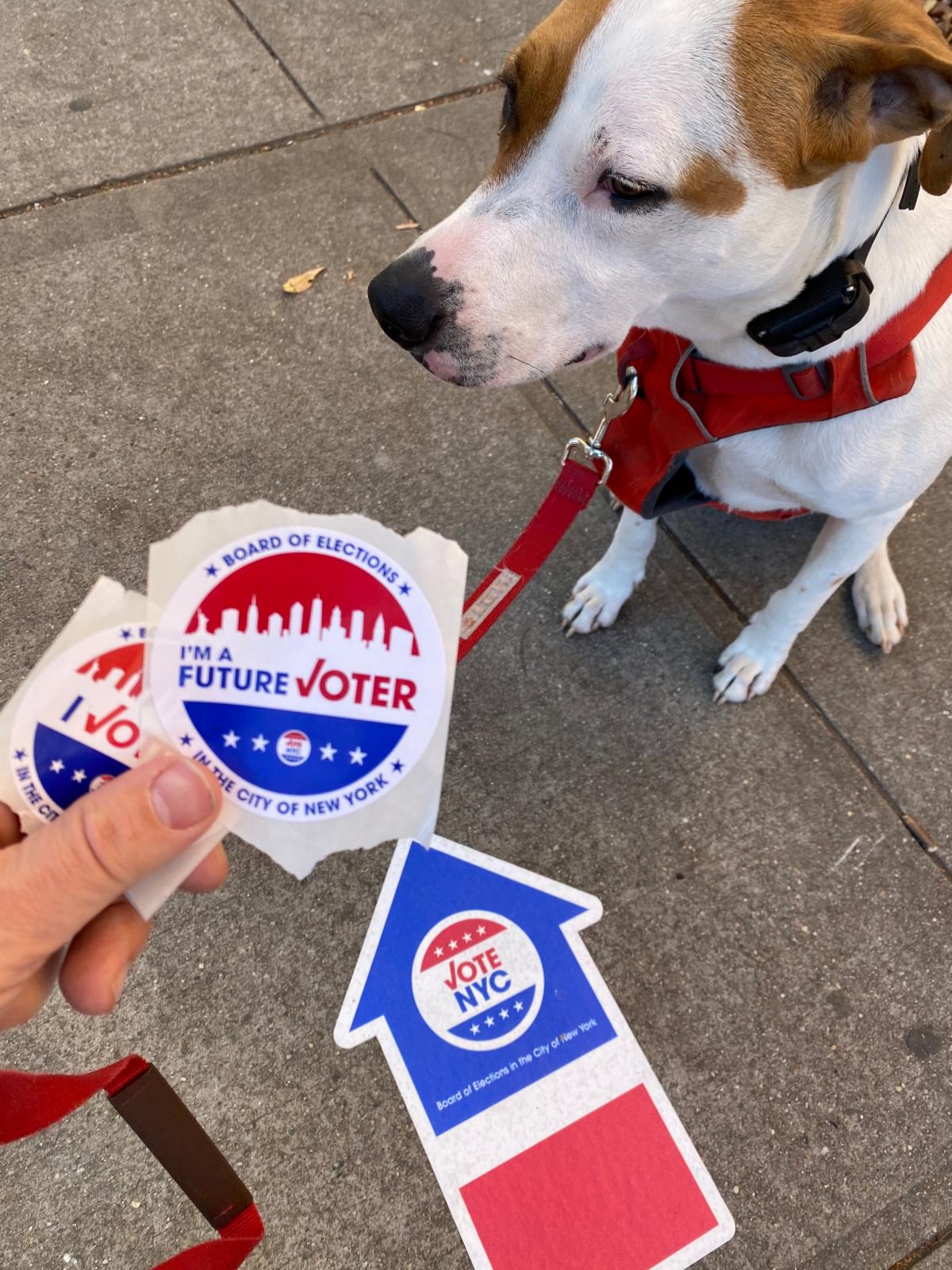 The Universe Casts Its Vote

All elections are important but this one felt particularly so.

Eager for the support, I brought Vlad with me to my local polling center which is a mere 3-minute walk from our home.

The last time I voted there, they told me dogs were allowed.

This time, however, I now noticed signage to the contrary.

Thus, as we entered, I wanted to confirm that it was indeed OK to bring Vlad in.

Not only did the volunteers say it was OK, they offered my pup a sticker,one I’d never seen seen before.

(I hesitate to say “Democracy is saved” but come on…)

Given that Time is the subject of this month’s new meditation HERE, these two stickers––I Voted / I’m a Future Voter–– seem fitting.

There’s an interesting blend of past, present, and future tenses between them.

Last week I shared some of my thoughts about how time keeps shifting for me and the topic has stayed with me and expanded.

In fact, there was a key moment this week where something unusual happened during my own meditation practice.

For the last two or three weeks, combining the practices of two of my favorite teachers––one I know in real life, the other only from his many books––I’ve kept a votive candle burning 24/7 on my desk.

The point of the exercise is that the steady flame is a way of holding an intention.

I also like it because it evokes the best memories of my altar boy past.

There’s a kind of quiet, hushed conviction around it, particularly given that with the time change, when I enter my office in the morning and it’s still dark out, there’s already a candle lighting my way.

I’ve kept replacing the candles over the last three weeks as they burn out.

And at the same time, oddly my doubts about the wisdom of this votive practice keep increasing.

There’s a perpetual tension in spiritual camps between setting goals––something I really believe in-–and surrendering to what you want on an emotional level in the present moment (which I also fully endorse).

In case that sounds a little fuzzy, it’s basically NOT living your life around fill in the blank statements like:

(I’m sure you probably have a few relatable conditions of your own, whether they apply to bank balances / relationships / body measurements / or other changes.)

Having a perpetual flame seemed both a reminder of intention and persistence and at the same time a protest against the current reality.

Was the flame a sign of faith…or an ongoing petition of dissatisfaction?

Increasingly, the candle practice felt like a plea for something new to arrive, a protest for some mini-miracle that would either fix things or kick everything up to a whole new level.

In fact, while the candles were burning, not one but three successes arrived but I felt they “didn’t quite count” since they weren’t fulfilling all the technical requirements of my visualization.

And then one day, in the middle of a meditation, just as the scales tipped towards “embrace the emotional reality of what you want in the present,” something interesting happened.

Although the latest votive candle was only half-burnt, when the timer’s chime sounded and I opened my eyes, I saw that the candle had gone out.

I’m not sure why it happened––maybe I sighed a little too deeply at the realization that “I have this on a feeling level right now”––but it felt as though the Universe was casting its vote in that direction.

Since I live in a hipster utopia, the nearest votive candle I could find was in a trendy gift shop.

Before it self-extinguished, I went through three of these candles below, each delighting me with its mix of sincerity and irreverence, Catholic origins with a dash of spirituality via The Matrix.

(So maybe we can thank Keanu for whatever’s useful in this week’s insights.)

As I wrote last week, I think timing is particularly important when it comes to meditation.

There is an irony to this is that the “goal” of meditation might also be described as transcending time, or as the 2nd yoga sutra puts it, “stilling the fluctuations of the mind.”

Even so, almost everyone I know––including Bobby Axelrod on Billions––uses some kind of timer for their meditation practice.

And yet I’ll never forget my first meditation class during yoga teacher training.

It was led by Sarah Tomlinson, who’s become a friend.

She started off the session with the simplest of introductions, asking us to close our eyes, and then leading us with a single chant of OM.

And then she did nothing else.

We teacher trainees simply sat there in silence, not knowing how long the silent meditation was going to last.

For me, it was the opposite of “Serenity Now.”

In fact, it was torture…and it was brilliant.

Please note: I don’t think this kind of “spiritual bootcamp” exercise is for everyone.

Launching into a longer meditation like that was equivalent of dropping us into the river and letting us figure out how to swim.

I seem to remember Sarah saying afterwards that it was exactly 20 minutes but it felt like centuries.

Several people––myself included––felt like we should probably apologize to the person sitting next to us.

Because our thoughts were so loud and unruly in our own heads, it seemed probable that our neighbor must have overheard them.

(And frankly there’s nothing more unnerving than imagining what would happen if all your thoughts were suddenly broadcast to the world in stereo.)

Last week, I lamented that so many yoga classes have shrunk in size, but I also have simultaneously been a champion of the “bite-sized” bit of serenity.

In fact, I’ve designed all my meditations to be easy and accessible and only 5-10 minutes long.

(Again, the newest one is HERE.)

And this coming week I’m teaching some 15-minute online stretch and breathing classes to an international law firm in 27 cities around the world.

(More about that soon….)

Finally, I have a few more stories from the week I’m saving––how I healed some old wounds by hanging some old paintings, and how Vlad befriended some graffiti artists who gave us a reclaimed canvas––but for now I’ll leave you with this.

In this time of endless election turmoil, I can’t help but think of the last lines of this poem by Hafiz (really Daniel Ladinsky).

Here are the beginning and ending stanzas:

I know the voice of depression
Still calls to you.

I know those habits that can ruin your life
Still send their invitations.

But you are with the Friend now
And look so much stronger.

Keep squeezing drops of the Sun
From the sacred hands and glance of your Beloved.
And, my dear,
From the most insignificant movements
Of your own holy body.

Now, sweet one,
Be wise.
Cast all your votes for Dancing!