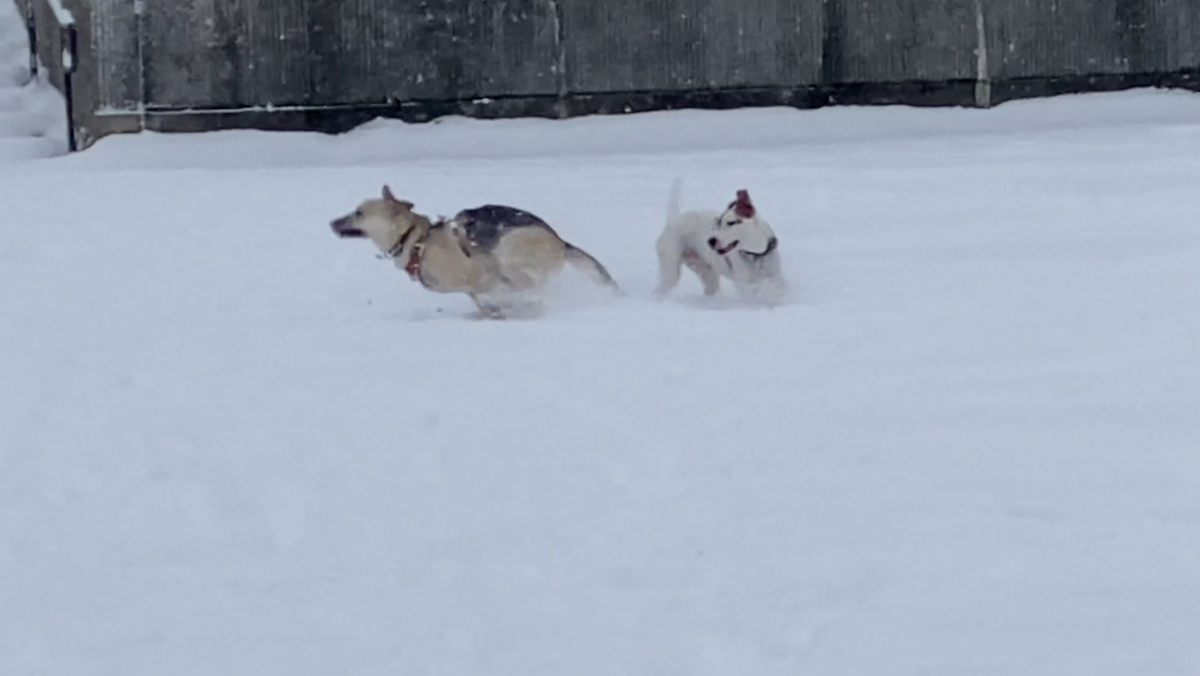 For better or worse, given how amazing this past Friday was, the rest of 2022 seems destined as anticlimax.

Vlad and Malibu (and their other puppy friends) experienced their first real snowfall.

At 7am that morning, the baseball field was suddenly Studio 54, the only party in town.

And the joy was unprecedented.

You can (and should) watch some video selects HERE.

The field was far more crowded than it’s been since NYC started getting truly cold.

And, just like overly enthusiastic parents of kindergarteners taking videos of the Christmas Pageant, pretty much everyone had their phone out.

We all wanted––make that needed––to capture this Kodak / iPhone moment.

Like a baby’s first steps, seeing our puppies run like maniacs through the Brooklyn tundra––even though it’s something that’s happened countless times before––was something we had to record.

Something truly memorable was happening and we all knew it.

There was a moment many years ago when I began writing a song entitled “If Wishing Made It So.”

Honestly, I was astonished by how well it was going.

In particular, the melody was falling into place so effortlessly, as were the chord progressions.

And then I realized my “If Wishing Made it So” was me simply rewriting note for note Harold Arlen’s “I Never Has Seen Snow.”

(For those of you who don’t know, Harold Arlen was a genius. He wrote Somewhere Over the Rainbow and the rest of the Wizard of Oz’s score plus dozens and dozens of other classic songs.)

Anyway, “I Never Has Seen Snow” is from House of Flowers, a pretty obscure musical with a book by Truman Capote.

Ottilie, one of the sex workers, turns down a marriage to a rich nobleman to marry a poor mountain boy, ironically named “Royal”.

And a lot happens.

Royal gets sealed up in a barrel and tossed into the ocean, he finds his way home on the back of a turtle, and ultimately there’s a happily-ever-after ending.

The point of this Act One finale song is that Ottilie sings how nothing can be more beautiful than her love, even the snow she’s never actually seen.

If you want to hear a few versions of my almost plagiarized song––Audra McDonald, vintage Streisand, a young and jazzy Quincy Jones, Arlen himself, and the original Ottilie, Diahann Carroll––I’ve gathered some HERE.

Along with letting go of what no longer serves us that I wrote about last week, another powerful way to begin the new year is to RECONNECT.

Specifically, connect again to our deepest anchors, those core moments of heartfelt wonder, the ones that shaped us.

I found out about Vlad’s existence on a September Thursday.

By Friday morning I was on my way to claim him.

Yet that Saturday, despite my Covid caution,I had long ago purchased ticketsfor the New York Philharmonic’s opening weekend, specifically to hear Beethoven’s Fourth Piano Concerto played by the astonishing Daniil Trifonov.

For me, that piece is very much a part of my personal life soundtrack (along with early Madonna and Kool & The Gang).

Perhaps it’s a little odd to say it this way, but I think of the concerto pretty much as an old friend.

Anyway, I brought someone who was hearing the music for the first time.

And it was amazing.

And I couldn’t help but wonder whose experience was more enviable: my hour of reunion and reconnection, or someone hearing this glorious music for the first time.

“We shall not cease from exploration

And the end of all our exploring

Will be to arrive where we started

And know the place for the first time.”

Like fish who can’t see the water that surrounds them, we so often lose sight of our experience right in the midst of it.

It’s so easy to become jaded, even by the miraculous.

I think that’s a huge part of why we treasure the experience of puppies in the snow.

It allows us to re-experience the snow again as though for the first time.

It lets us feel that if the world can be so instantly and beautifully transformed, and that maybe––just maybe––anything is still possible.

﻿If wishing made it so…