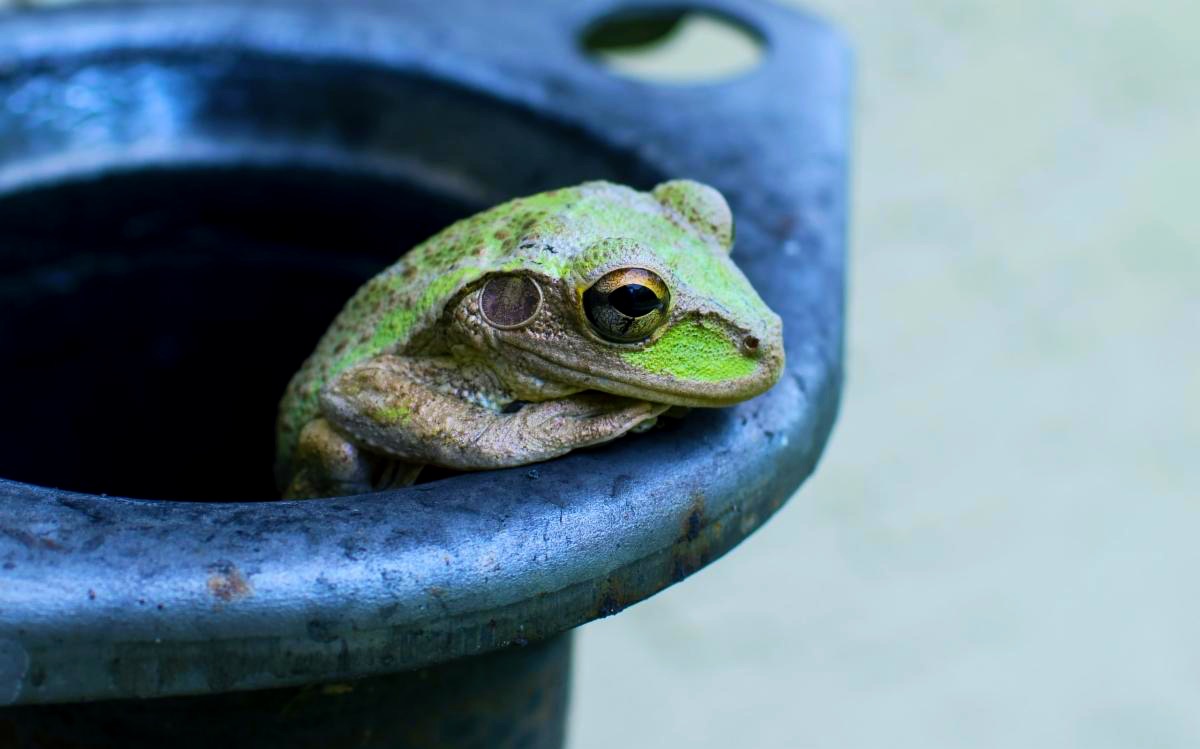 How NOT to Boil the Frog

It’s perhaps the most classic metaphor given to illustrate the danger of insidious situations:

Put a frog in a pot of boiling water and it will immediately leap out.

But if youstart the water at a comfortable level and begin to gradually heat it, the frog will find the situation tolerable, even a pleasant spa treatment, until it’s suddenly too late.

Unfortunately, that’s exactly the reality I’d begun to accept about my AC this summer.

﻿And here’s the lesson that helped me jump out of the pot.

Many things in life come with clear price tags.

Perhaps the favorite one I’m willing to pay comes after hosting Vlad’s best friend Malibu, something we did for two afternoon playdates this week.

To state the obvious: the price you must pay when two white / tan puppies frolic madly, particularly in the middle of a summer shedding season heat wave is a true blizzard of snowy dog hair.

Although they are barely exhausted after rolling around for an hour together, afterwards my Dyson certainly is.

This exchange, however, comes with no surprises and it’s a bargain I’m more than willing to make.

I’m going into it eyes wide open, with an exact read on the temperature.

Like with our metaphorical frog, however, other things can sneak up on you, particularly during a heat wave.

I began to notice that my AC wasn’t working as well as it used to a little while ago.

Having grown up without great or constant air-conditioning, perfect climate control still feels more like a privilege rather than a right.

I recall the recently reprinted New Yorker article written by playwright Arthur Miller about New York in the 20s and 30s:

There were still elevated trains then, along Second, Third, Sixth, and Ninth Avenues, and many of the cars were wooden, with windows that opened. Broadway had open trolleys with no side walls, in which you at least caught the breeze, hot though it was, so that desperate people, unable to endure their apartments, would simply pay a nickel and ride around aimlessly for a couple of hours to cool off.

﻿I’ve been living an air-conditioned life for a long time now, and even though I’ve never ridden around aimlessly on the subwayjust to cool off, I still recall that feeling and impulse.

﻿Perhaps that’s why, unlike the frog in the metaphor, I was very aware my atmosphere was increasingly heating up…and I was more than willing to jump.

Speaking of leaps of both faith and necessity…

Good friends invited me to a remarkable event this week: “Soul to Soul: Black Women in Music” at Little Island, an incredible outdoor venue on the Hudson River in lower Manhattan.

One of my all-time favorites was singing––the incredible Lillias White (pictured above)––along with an all-star cast of amazing performers in a concert of blues, jazz, spirituals, gospel, R&B and pop hits.

In one of the song intros, a host told a story I’d definitely heard before but forgotten or perhaps even dismissed because it seems so improbable.

When 17 year-old Ella Fitzgerald’s name was picked from a hat to perform at the Apollo Theater’s legendary Amateur Night, she was intending to appear as a tap dancer.

When a terrific dance act came ahead of her, she decided at the last minute to sing instead.

Ella performed the only two songs she knew and she won––of course––pocketing the $25 prize.

It’s just hard to believe that the “First Lady of Song” and the “Queen of Jazz” almost made her debut as a dancer.

Indeed, sometimes our aim in life is just a few degrees off.

What we really should be aspiring to might just be adjacent to what we think is the bullseye.

As the temperatures rose in July, I felt a growing sense of frustration that I wasn’t as cool as I wanted to be.

(And certainly not as cool as my enormous electric bill would seem to indicate.)

It was only when I began grumbling to my neighbors in the dog park––one of whom complained about how cold her apartment was––that a thought occurred.

In my old building there were flurries of seasonal emails about the importance of replacing HVAC filters.

They were all very urgent and hard to ignore.

When it comes to our HVAC units, my new building’s administration has been shockingly laissez-faire.

Without the reminders, it had completely slipped my mind, until my upstairs neighbors mentioned it.

Inspired and relieved that perhaps I had found the perfect fix, I was determined to tackle the problem.

To my great surprise, however, I was again at a loss.

I scoured my apartment but I could find only the air vents, not the access panel where the filters live.

I wondered for a moment if my unit shared it with another apartment but that seemed quite improbable.

Then to my astonishment, I found what I was looking for in a place I’d hadn’t thought to look, a place that made no sense.

Yes, the HVAC access panel was there, but the contractor had covered 2/3 of it.

In fact, it was entirely impossible to open it without demolishing two units of built-in shelving, if not entirely redoing the entire kitchen.

Before discussing it with the management, I wanted to get a consult from an HVAC-pro.

After I texted him the photo above, the technician paused then said, “Forgive me for using such strong language…but that’s just idiotic.”

It was with a heavy heart that I accepted that my only path to a cool breeze might just be demolition (and/or litigation), in a heat wave nonetheless.

I have a healer friend who often cautions people about how long and arduous the work may be.

She is obviously wise to discourage those seeking instant solutions to long-standing, complicated problems.

Folks want a creative visualization that’s going to instantly erase decades of bad decisions….or they want to lose the 20 odd pounds they put on over 2 years of quarantine in 2 weeks.

And yet sometimes the instantaneous manifestation is possible.

My favorite example is getting the wi-fi password right.

A single digit off and you’re entirely disconnected.

Just fix that tiny error, and suddenly you have instant and complete access to all the knowledge in the world.

Brute force might not be the answer––it will actually make things worse––but sometimes a little fine-tuning of the magic formula is all you need.

Years of therapy is certainly not required.

Indeed, sometimes the answers to your problems are suprisingly closer than you think.

In general, I’m extremely excited about my project launches for the fall but last week was feeling a bit overwhelmed by a technical aspect of one of them.

I’ll spare you how boring and frustrating the problem was but suffice it to say it was significantly dampening my enthusiasm.

No doubt the heatwave in my apartment was contributing to it, but I found myself fighting an idiotic impulse to just walk away from the entire opportunity.

Then, I realized in the middle of a meeting about something else entirely that the guy I was hiring for another task might just be able to solve this for me, too.

Once I moved the project from my own plate to an adjacent one, what was entirely unmanageable suddenly became effortless.

More importantly, moments before I’d felt my enthusiasm for the project as at best a dying ember.

I was astonished at how quickly my passion was reignited, merely by shifting my tiny task to someone else’s to do list.

All it took was looking a little bit sideways to find the answer.

With a heavy heart, and mostly as a formality to establish the paper trail, I put in an online request for HVAC cleaning via my building’s website.

Within two hours, one of the supers arrived.

He stared at the above situation and scratched his head.

He couldn’t believe the design flaw either.

But then, to his credit, he agreed that it was worth seeing if he could reach the filters through via the adjacent vent.

He unscrewed the panel and five minutes later, thanks to his very broad reach, we were both astonished that even though everything about this situation and solution was absurd, this actually worked.

The super managed to pull out the filters, washed 3 years of gunk from them––which is frankly pretty scary to think about––and within 10 minutes my apartment was cool again.

Frankly,it’s actually way too cold now, but at least I can control that.

Anyway, I realize I’m talking about very disparate things here but there is a thread between all of them.

Sometimes the access panel has been paved over, but the side vent can provide what you need.

Or maybe giving away just one of your troublesome tasks can renew your passion.

And finally please remember that if someday your tap dancing career suddenly looks doomed, well…you might just want to consider singing instead.