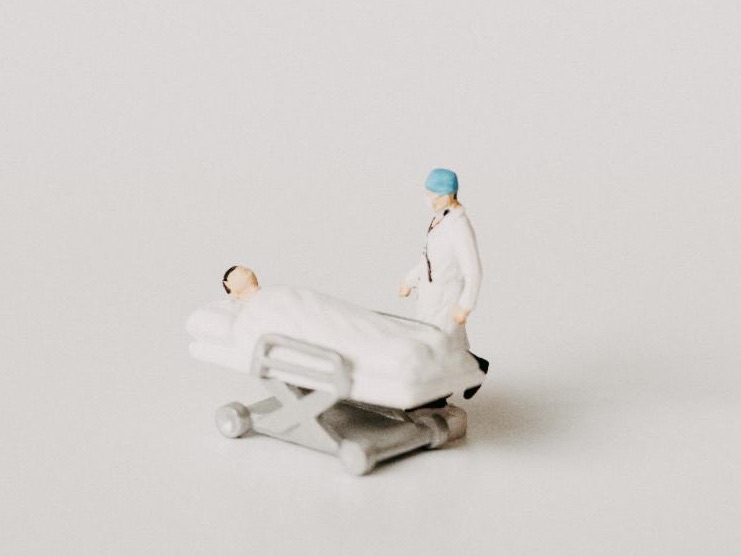 This was more than a decade ago.

My Yoga In Bed book and dvd were in their publicity infancy.

Someone at Bloomingdales had heard of them, however, and reached out, asking if I wanted to do an event for their bedding department.

Their PR person thought it would be fun to have me share some basic stretches, telling me I could sell some books and DVDs if I wanted.

Eager (make that “secretly desperate”) to do whatever it took to make the project succeed, I immediately said “Yes.”

I showed up with a sweet yoga student friend who’d volunteered to model for me at the appointed time one Saturday afternoon.

We settle in on the agreed upon mattress and, given that there was no audience other than confused furniture shoppers innocently walking by, began a mild-mannered demo.

Very swiftly, an agitated floor manager approached, telling us we shouldn’t be on the beds like that and insisting that we leave.

I explained that this was a store authorized event, even showing her the back of the book and DVD with my picture on them.

Entirely unconvinced, she left to confer not only with her manager but also toget security to have us removed (probably by force if necessary.)

After receiving official confirmation that this was all legit, she begrudgingly let us stay.

The non-event completed its limp course.

We spoke to one or two nice strangers but we sold absolutely nothing.

It was an entirely depressing waste of time.

Note: I do have a much worse “rock bottom” personal life moment––one I’m saving for the memoir––but …

When it comes to career milestones, almost getting removed by security from your own promotional event is pretty D-List indeed.

This month’s meditation theme is Discovery (HERE) and there is, of course, no more mysterious or uncharted territory than our own identity.

Who we are––or more accurately, how we define ourselves––is so clearly the driver behind so much of our lives.

And yet this often works as an unconscious autopilot, taking us along for the ride, leading us on scrambled adventures to misinterpreted destinations.

During an EFT session where you’re tapping on acupressure energy points trying to undo the energetic blockage of some past trauma or negative pattern, good sessions usually include an acknowledgement that you’re doing more than sweeping the floors and putting on a new coat of paint.

Although what you’re trying to remove from your psyche is NOT you, it’s nonetheless intertwined with you.

There’s often a line regarding the unwanted emotion or condition such as:

That’s often the most difficult thing to see: that the thing we don’t want is part of our identity.

Removing it, therefore, feels like removing a part of ourselves.

It’s a psychic surgery on our basic self-definitions, something that can’t help but feel life-threatening.

The last piece of fiction I’ve had published was my novel Downward Dog.

I got a fan letter from a sweet stranger, telling me how much she and her best friend loved the book.

They had one plot point question, however, that they were dying to ask me.

The details are incidental but essentially towards the climax some sensitive information gets revealed and the narrative deliberately doesn’t reveal how that happens.

Delighted by their enthusiasm, I was happy to explain why I wrote it that way.

I had a point I wanted to make in the novel about karma and secrets always coming out in the end, yet there always being some unknowable mysteries about how things unfold.

The fans grew suddenly angry and dark, accusing me of not being me.

“The real Edward Vilga would never have said that,” was their dismissal of my email explanation of my own plot.

They wrongly assumed some imaginary presumptuous assistant was answering my correspondence and signing my name.

What would I gain by shattering the identity they had of me, one to which they clearly seemed very attached?

I had another kind of identity crisis of sorts this week.

As I struggled with a problem at 7 am, unprovoked, my desk chair simply collapsed.

I was in the middle of a thorny dilemma, feeling like a bratty teenager convinced they will never need algebra, refusing to study for their midterm.

Since the program is designed for busy people with careers, I’ve been keeping it in the background mostly, often forgetting about it entirely until there’s an exam or a project due.

Parts of it I love and are entirely relevant to everything I do.

Some courses enrich things already in my wheelhouse like entrepreneurial adventures, teaching money & mindset, and advising on boards as a wellness authority.

Other parts––such as the currently due finance project, the task of which is determining where an imaginary cell phone company should build its next factory based on ten years of property depreciation and more––feel to me like scratching a blackboard sounds to other people:

In other words, painful and unnecessary.

The dilemma is that the program is essentially pass/fail with an honors category for the top 10%.

Right now, even if I failed this assignment completely, I’d still pass…possibly even still be eligible for honors.

Discussing the situation with my great friend Sally, she pointed out that my identity was a real part of this conundrum.

Being “the good student,” the one who always goes for the extra credit assignment, is deeply embedded in me.

(In fact, every now and then I am still haunted by a dream where I’m worried I forgot to drop a pass/fail high school elective.)

This part of my identity has mostly served me well and thus it’s hard to shrug it off or to negotiate with it.

That is, until your chair collapses underneath you while you’re making the decision whether or not to muscle through and master tax amortization benefits over the course of a weekend.

There’s an ironic conclusion to the Bloomingdales saga, one I’ve shared often and on my website HERE.

A year and a half after my limp debut, a new regime in the Bloomingdales publicity department reached out asking for another promotion, this time, for a specific luxury bedding brand.

All this was after the same Yoga In Bed project had already achieved considerable success––TV such as Live with Kelly! plus People and dozens of other magazines.

In other words, this round,  I was not standing hat in hand.

No longer desperate, I said I’d consider it, listing a bunch of conditions, ones to which I thought they’d never agree.

Things such as buying several hundred DVDs upfront as giveaways.

To my great surprise, they said yes to everything.

In fact, they asked for two events, and rather than just having it in the fine-print in a weekly flyer, they took out two 1/4 page ads in the New York Times.

In those ads, they described me as a “legendary yoga master” –– something that’s hilariously inflated and inappropriate to this very day.

These second incarnation events were as successful as the other had been a failure.

In fact, there was a line of people waiting to get in.

The takeaway is, of course, that one’s identity transcends all of this.

Mine CANNOT reside somewhere between being kicked out of my own event and being a “legendary yoga master.”

Success or Failure at Bloomingdales doesn’t get to determine my self-worth.

Nor is it about clinging to the role of being a good student, even when my desk chair collapses underneath me.

It’s certainly not in the hands of readers who are convinced they know my own intentions better than I do.

My identity’s truth lives in an entirely different ballpark.

As Rumi says (albeit via modernist translation):

“Out beyond ideas of wrongdoing
and rightdoing there is a field.
I’ll meet you there.

When the soul lies down in that grass
the world is too full to talk about.”

I yearn for that field beyond wrongdoing and rightdoing….

That’s the only place we can really discover the truth about ourselves.

If you ever want to hang out, Vlad and I are happy to meet you there.