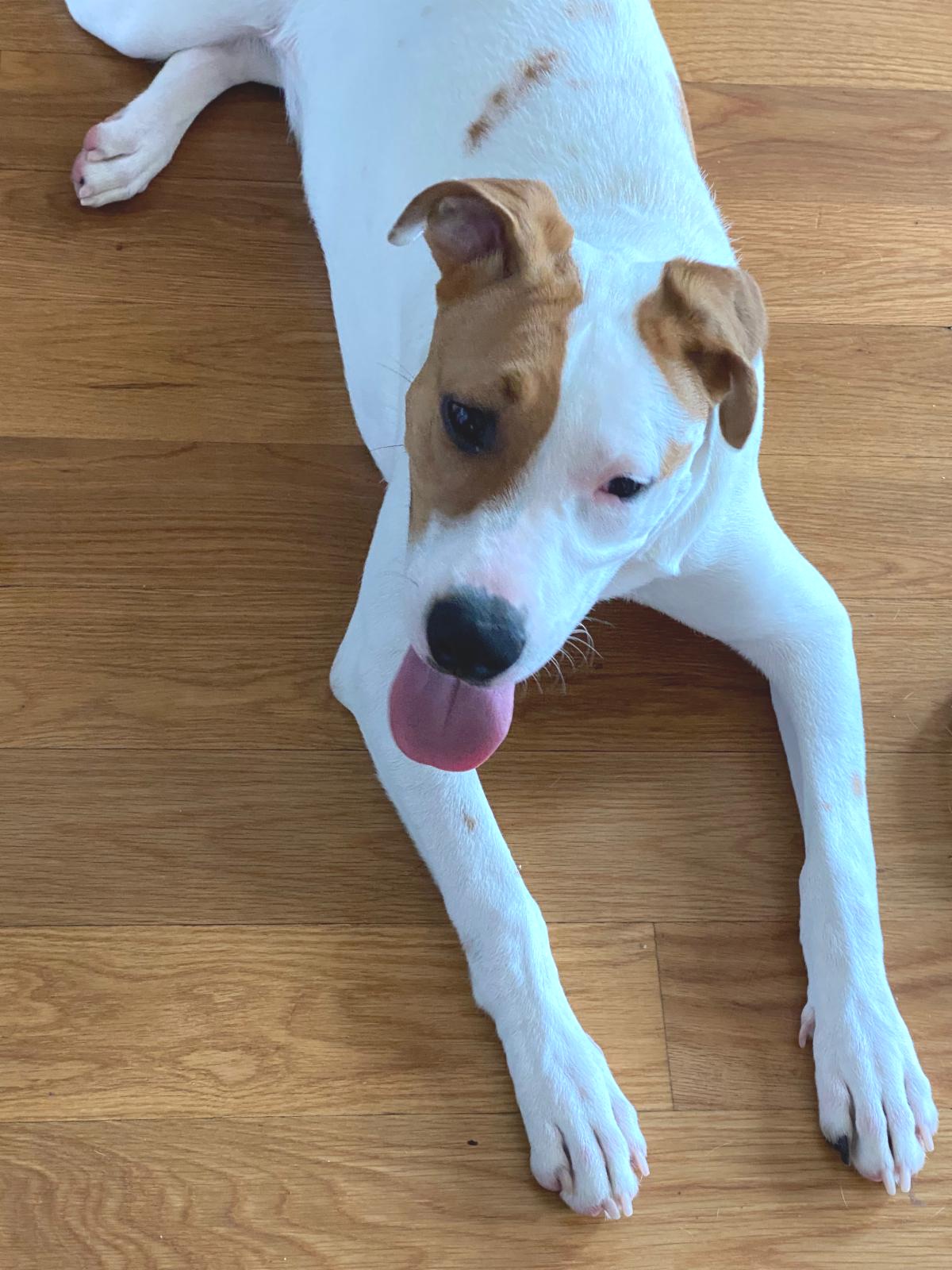 And I definitely have a favorite dog in my building.

Her name is Dua, a puppy named after the British pop sensation Dua Lipa.

There’s just something about her, a particular flavor of sweetness perhaps, that reminds me of my dearly departed Belle.

I’m embarrassingly gushy whenever our paths cross, dropping to my knees to accept endless puppy kisses and singing her obvious and endless praises to her owner, Charlie.

Charlie and I have become friendly but even though I gave him a copy of Upward Dog, the book I wrote about Belle, and we text, we have yet to hang out beyond our chance meetings.

But this Thursday at 8 am, everything changed.

(And on a seismic level).

On my way to my jump rope workout in the courtyard, Dua and I had another spontaneous, ecstatic moment in the stairwell.

Charlie revealed that one of Dua’s litter mates had just been returned to the shelter.

(The reasons were vague but apparently the family’s child wasn’t getting along with the puppy).

Yet nonetheless, if this rejected pup had a mere fraction of Dua’s sweetness and intelligence, I was immediately all in.

“What’s the next step?” I asked Charlie.

Enamored with the notion of Dua having a sibling in the building, Charlie immediately replied:

“I’ll call them as soon as they open. And I’ll drive us there whenever we can get an appointment.”

Charlie got the first available appointment the next morning.

And suddenly, everything was about to change.

The next morning Charlie met me in front of the building in a rather…flamboyant…vehicle (pictured above).

The driver’s side was missing a door.

There were no windows or roof.

The back of the jeep had been gutted in order to insert some kind of impressive sound system, leaving not enough room for even a suitcase.

Dua and I happily shared the front seat together, and off we sped for the hour’s drive to Westchester.

Even though the conditions are bizarre and artificial (Dua’s brother had been returned and was more or less in lock-up), I knew the moment I saw him that he was mine.

His joie de vivre and sweetness were off the charts, even for a puppy.

I will abbreviate the moments at the rescue center but to their credit they were thorough––perhaps too thorough––in their vetting and paperwork processing.

Yet there was a VERY strained moment at the end when the intern facilitating things felt she needed to call her supervisor to approve our get-away vehicle.

Again, we were about to depart in a windowless, doorless, roofless jeep.

Dua (a serene and experienced traveler) would be resting near the gear shaft, me holding her leash while simultaneously her newly adopted brother would be wedged behind me.

Charlie and I felt we were reasonably safe.

After some well-intentioned negotiating and a complicated seat belt/leash tethering jerry-rigging, we reached a compromise.

The dog was mine and soon reunited brother and sister were on our way to their forever homes.

I immediately renamed the pup “Vladimir” which I’ve always thought is a particularly great name.

For formal occasions, “Vladimir Vilga,” of course, but you can also call him “Vlad” or even “V.”

(It also felt doubly appropriate since Dua was named for Charlie and his wife’s favorite musician, I might as well name my dog after mine, Vladimir Horowitz.)

As I write this, we’ve been together for 36 hours…

(He endorsed my own book about Belle with “Enchanting!”).

And the thing is, although I never lie in marketing, bathing in Vladmir’s joy, I just can’t do everything all the webinars want me to do right now.

For example, I can’t start by highlighting the pain points to you, my readers.

(I’m too drenched in puppy love).

I certainly can’t employ the manipulative marketing language I’m supposed to use.

(Belle wouldn’t want that, either)

It may a tragic mistake––and forever doom Vladimir’s newly established college fund––but I just want to offer what I’m launching this October 3rd––and offer you a 20% discount since you’re on my email list.

An 8 week online course for:

iINFO is HERE and the discount code is (of course):

There’s an old zen proverb I love and have used in several talks and corporate presentations:

If you don’t have the time to meditate for 20 minutes,

you need to meditate for an hour.

Delivered well, it always gets a laugh.

The truth is that I really don’t believe that any more.

In fact, I’m actually defying that with this program.

If you don’t have the time to run to a yoga center, change clothes, and take an hour class, I totally get it.

Just do 12 minutes instead.

If you do, you’ll be fine and more than fine.

Finally––and this Vladimir’s idea––if you forward this offer to anyone (or want to be an official affiliate) and someone signs up for the October program, I’ll give you $200.

That’s right, for the good deed of introducing someone to the benefits of yoga, you get $200 for each person.

Just let us know it was you who got them enrolled.

(You can respond to this email or just text Vlad directly).

There definitely are some challenges ahead.

For example, I’m not quite sure is Vlad is 100% housebroken.

(And he’s definitely a party boy so I’m going to have to keep an eye he doesn’t sneak out at night.)

I’ve fallen totally in love with him.

And if you keep reading these newsletters, if you haven’t already, I know you will, too.

P.S. 20% off the program HERE with discount code TeamVladimir.

And $200 to you for anyone you forward this to who signs up.

﻿So many adventures ahead!