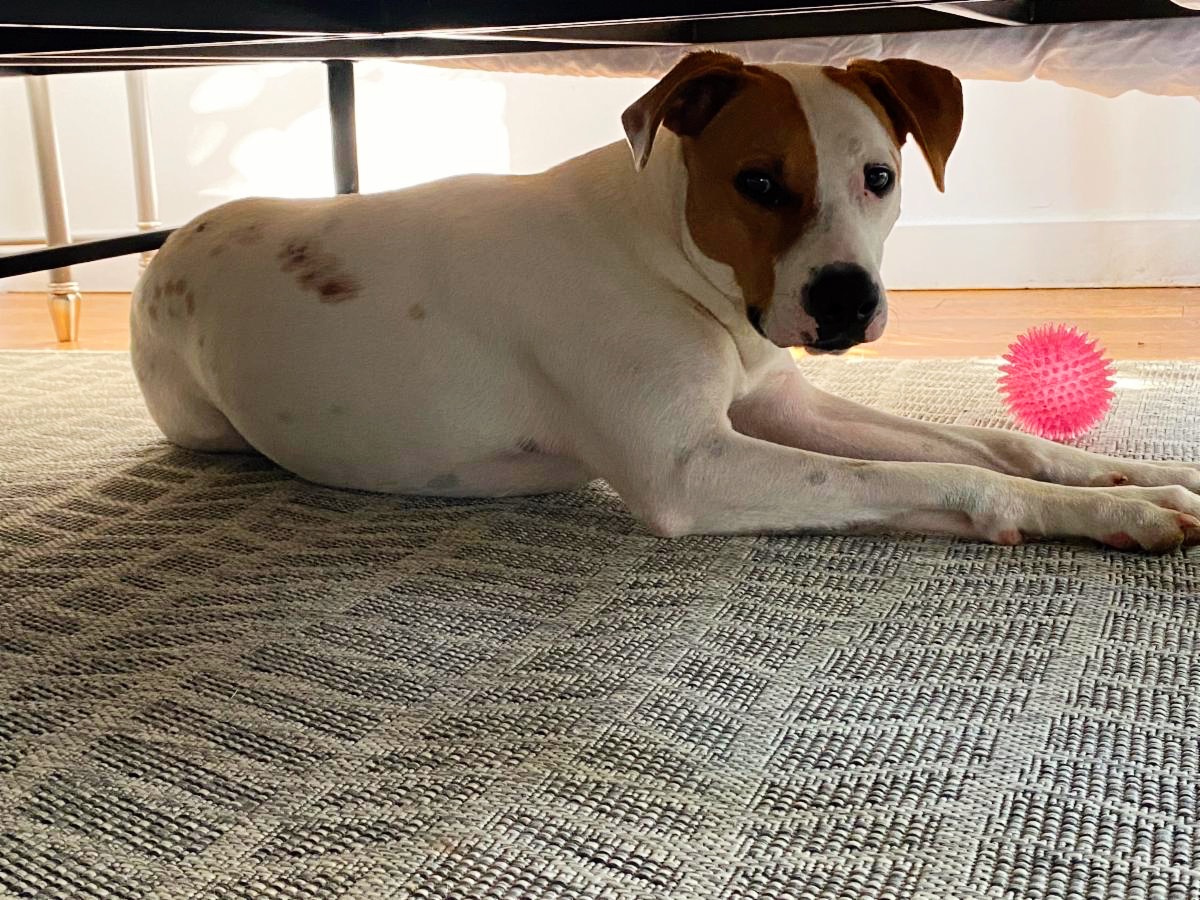 Advantages of Hiding Under the Bed

June Meditation of the Month is HERE

I admit I am profoundly prejudiced on this topic, but I do sincerely believe my puppy Vlad is a genius.

He is, however, making one major miscalculation these days, one tactical error that’s utterly self-defeating for his goals.

Namely, he thinks that if he hides under the bed, I won’t ever leave our apartment.

I’m about to film 21 videos for an upcoming wellness course with a physical element, and inspired by professionalism and vanity, I’ve significantly increased my workout efforts.

Since jumping rope in our apartment is an obvious recipe for disaster, that means several times a week I must take my workout outside.

The prep for my departure is very specific and thus easy for my little dog to spot.

You see, right now I have 3 designated backpacks in my life.

One is for general purposes, and usually involves Vlad-included activities.

Things like trips to the wine store or visits to local hipster shops to purchase a tasteful candle or a used book or a cactus or some other hostess gift.

My second dedicated backpack is full of squeaky balls and other dog park toys.

It comes out every morning before we hit the baseball field.

Far beyond his general interest in men’s fashion, Vlad knows what each knapsack signifies for our relationship and our schedule

Nestled next to the harmless yoga blocks and straps (which mean I’ll be chilling at home with him for the next hour), Vlad’s wary the moment the jump rope knapsack emerges from the living room credenza.

Given the rapid rise in my solo jump rope excursions, Vlad’s only recently come up with his failed counter strategy.

He believes if he’s hidden under the bed, I can’t crate him, and thus I cannot leave.

And yet, since I’m no longer crating him when I depart, his hiding efforts have absolutely no impact on the situation.

Simply put, a “Hiding Under the Bed Strategy” does not work for Vlad, or for any of us, and it’s inspired this month’s new meditation “Recognition” HERE.

Recognition is a fascinating theme.

We both crave desperately recognition yet often run from it.

Our ambivalence and counter-productive behavior is even referenced multiple times in the Bible.

Matthew, Mark, and Luke (and the non-canonical gospel of Thomas) all share the same parable admonishing us to not hide our light under a bushel.

Like many things in life, though, the wisdom of that concept seems so obvious when it comes to other people but it gets fuzzier when applied to ourselves.

In the past, I’ve coached so many people on creative projects where they were utterly hardworking, committed, and fearless yet simultaneously standing in their own way.

The reasons are myriad but it always boils down to the same thing: there’s something about truly being seen, being authentically known, that feels well…more than a little dangerous.

And yet, alas, that kind of recognition is also the thing that deep down we most want and need.

Our great friend SARK’s quote above is particularly resonant.

(Also, just FYI I have some exciting news about SARK’s latest offerings I’ll be sharing very soon, maybe even next week).

SARK’s words are so universally relatable because we all want to be truly seen in all sorts of ways, from our work accomplishments to our intimate relationships.

For me, it particularly hits home when it comes to some of my creative work.

Indeed, I can still recall how in sixth grade in Sister Marie Julie’s English class, the assignment was to write a Christmas story.

I don’t know why––perhaps in a fit of literary hubris––I decided I would write mine in rhyming couplets.

I was horrified, however, when on the date it was due, Sister Marie Julie surprised us by asking us to volunteer to read our work aloud.

Although I was genuinely inspired to express myself by turning the story assignment into a poem, having had no idea I would have to share my creativity publicly, I was suddenly horrified.

For the next 40 minutes, I somehow willed myself into invisibility, managing not only to avoid volunteering to read, but also not to be called upon.

Like Vlad separating himself in order to avoid the pain of separation anxiety, I more or less hid under the bed.

Obviously, I’ve come along way since that 6th grade moment.

All the books and courses and theater and films I’ve created, and perhaps particularly these newsletters, are proof of that.

And yet there are still odd moments such as with a former proofreader I used to work with on several projects.

Yes, catching typos and suggesting commas was pretty much his job description, yet after a while it became disheartening that there was never a comment on the content itself.

I was trying so hard to put forth my very best, to share something that was important to me, striving to create some heartfelt responses in my reader.

When the only response I’d ever get was notations on the punctation and nothing else, it began to feel like my work was a consistent, quiet failure.

When I took an advanced seminar on Poetic Versification for my English major at Yale––I guess the spell I cast in Sister Marie Julie’s class eventually wore off––even that notoriously prickly professor’s way of acknowledging our work felt better.

Yes, we got standardized letter grades for the course, but each of the weekly poems we had to write were ranked as follows (and I’m not kidding about this):

the best mark you could hope for.

You can imagine my delight when I finally submitted something that got an “NAAB –– Not At All Bad.”

From someone that picky and deliberately withholding of traditional praise, the recognition was ridiculously hard-won and thus doubly intoxicating.

I can’t remember if I’ve told this story here before but even if so, it’s worth repeating.

Many years ago I was directing a film project.

After a day or two of filming, I noticed that one of the normally friendly and uber-professional actors was being slightly awkward, even squirrelly, around me.

Finally, they addressed the issue.

They explained that they knew that every day after the cast and crew left, I had been watching the unedited dailies with my cinematographer and producer.

Yet when the next morning arrived, I never commented on what I had seen.

For them, my not responding to their performance set a weird, unnerving tone for the entire day.

In my professional naïveté, I hadn’t realized that even for an actor of this stature––someone who’d recently one several of the biggest awards––acknowledging their most recent performance was important.

It wasn’t being narcissistic or neurotic.

Instead, I saw clearly that it was just a basic human need to be acknowledged, seen, and recognized.

Ever since then, I’ve tried to offer that to everyone I work with and everyone important in my life, and to embrace my own need for it as well.

In the same way that Vlad’s beginning to understand that hiding doesn’t work––and also that Papa’s always coming back––I hope we can all both safely reveal more of ourselves and simultaneously recognize each other.

The results of that would definitely be N.A.A.B.