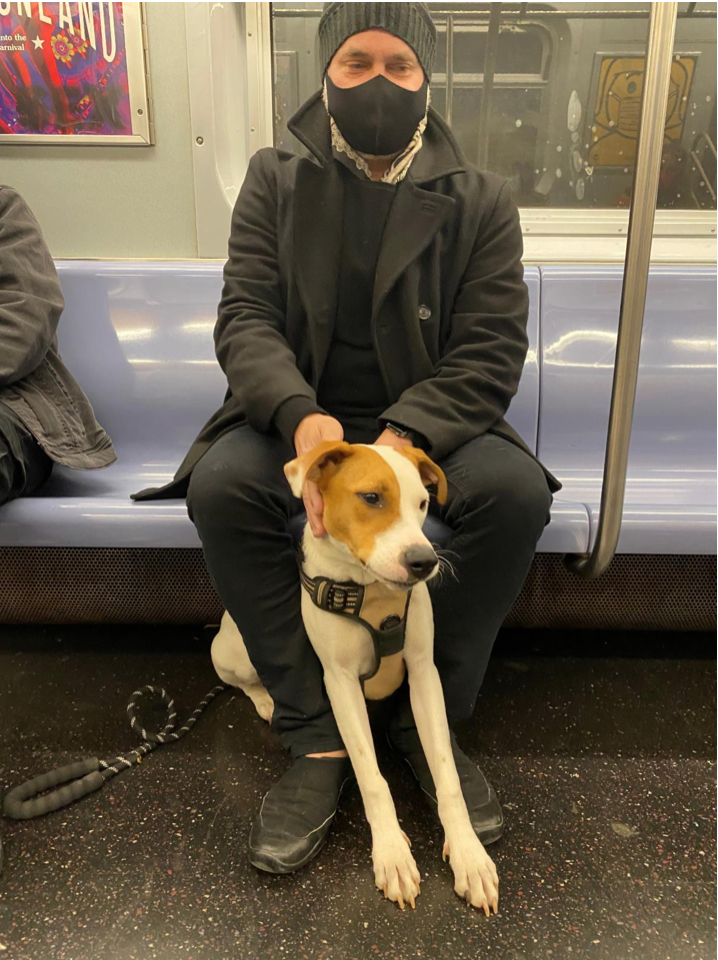 This was a week of milestones.

Less perhaps for me than Vlad.

Most of them centered around transportation.

﻿For example, his first subway ride.

This was followed by the first of 3 Uber-Pet Rides.

Will he get 5 stars?

(And, by the way, until last month, I had no idea that Uber-Pet was a thing…you just have to swipe up.)

﻿Plus a two-hour trip on Metro North where he charmed the crowd, gained admirers, and garnered affection from strangers from Grand Central to New Haven.

My concerns over traveling with Vlad were almost non-existent.

There WAS a serious drooling issue on our only previous vehicular experience: adopting him from the rescue shelter.

(Then again, it was a high emotional intensity day already and we were traveling in a jeep without doors or windows).

This trip he was beyond flawless.

In fact, he spent the bulk of the return asleep in my lap, something I love but that he’s also getting a little too big for right now (sigh).

Other highlights included seeing his first deer (he was intrigued) and a bark-off with his cousin Max, a 12 year-old yellow lab.

Mostly though, it was interesting to introduce him to his extended family and to show him the house where I grew up.

Linguists debate whether or not Eskimos actually have 50 or more words for snow.

A little research reveals that since it’s a fusional language that allows you to playfully added suffixes, it’s more like like they have hundreds.

Here are some cool Eskimo-Aleut combos:

I sometimes wonder why we don’t have the same thing in English for the word “home.”

Having lived in New York for most of my adult life, it’s odd when someone asks if I’m going home for the holidays.

When asked in the lobby, I’m tempted to point upward and ask, “You mean to the 7th floor?”

Why aren’t there words to distinguish “Where I Grew Up” and “Where I Live Now?”

(We sometimes make those distinctions with family––“Family of Origin” vs. “Chosen Family”––but the phrases always feel a little cumbersome and overly pointed.)

Why is our language so limited?

Can you call more than one place home?

﻿And, ultimately, is “home” a place or a feeling?

It was fun to see my childhood neighborhood again through Vlad’s young eyes.

The last time I was there was Thanksgiving 2019.

Belle and Cha Cha (Belle’s stylist) came with me.

That trip was logistically challenging in entirely different ways.

While she was a superb and seasoned traveler, at that point Belle could no longer do any stairs.

It was difficult but I’m so glad we made the trip, particularly since Covid was lurking around the corner.

This time, my concerns were more how off-leash I could allow Vlad to be, particularly given that the fenced-in community college baseball field I was counting on for outings had been transformed into a lot full of solar panels.

﻿Fortunately, loyalty and his passion for his spiky ball kept him by my side, a love he shares with his sister Dua, demonstrated in yesterday’s (endless) tug of war.

In writing this email, I struggled with whether or not to offer a Black Friday Sale.

I do have something coming up in January that I’m excited about yet I felt myself numbed by the endless offers flooding my own inbox.

It may be foolish that I’m ignoring conventional marketing wisdom.

On the other hand, conventional wisdom might just be for the conventional––something I think that you, Vlad, and I are probably not.

It seemed more appropriate to simply offer some small reflections on new milestones:

On traveling for the first time with a puppy…

And remembering the last time with a senior dog.

Introducing a new member into a blended pack…

While sitting at a table with 3 generations of relatives.

And realizing it’s only because of how much you’ve grown.