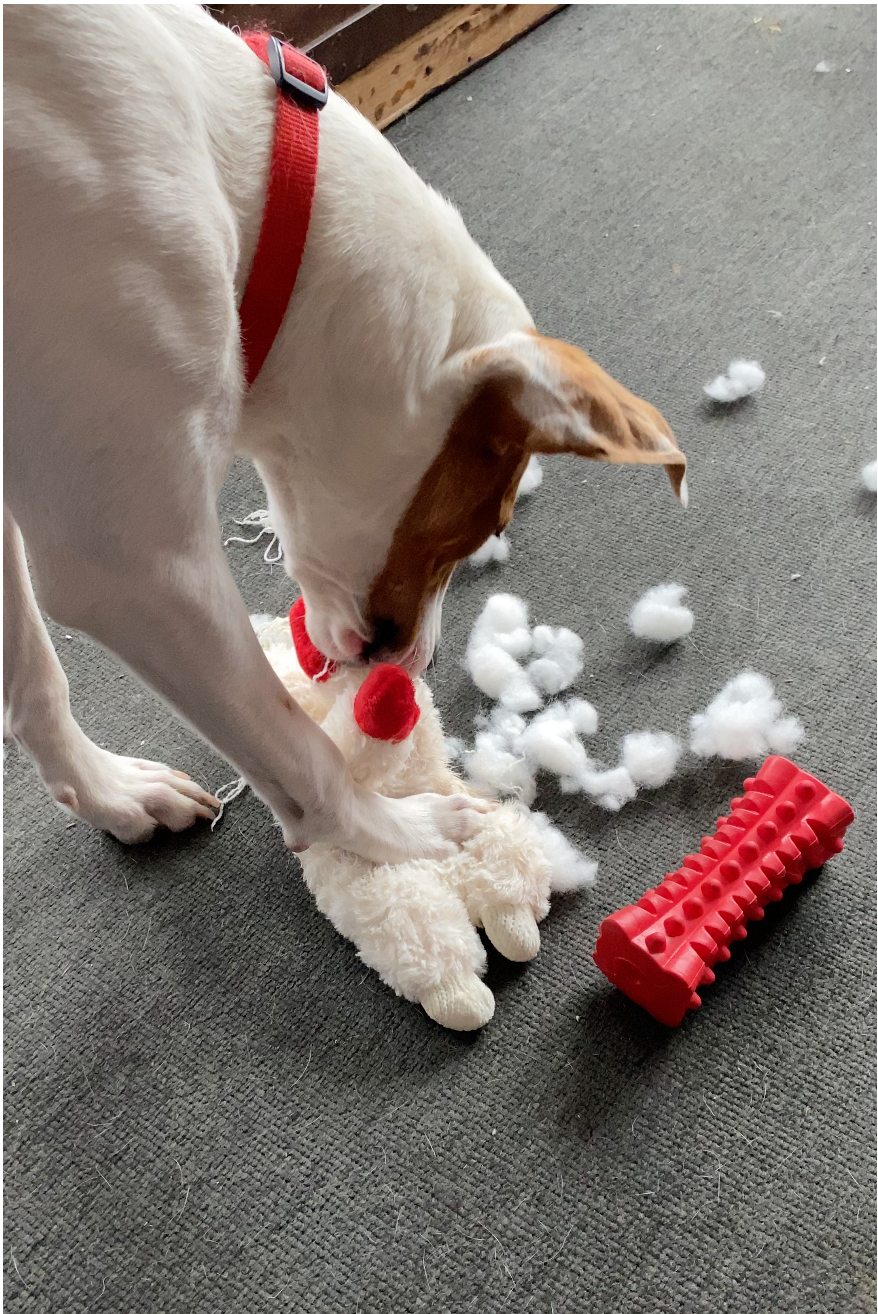 And that’s perhaps what made it all the more magical.

But this Christmas morning, Vlad and his best friend Malibu were the only dogs in the baseball field (the one we pretend is a dog park).

And HERE is what ensued.

I’m not sure why they were the only dogs there.

It might have been the holiday, of course, or the hour (7am).

Or it could have been the mud left from yesterday’s snow flurries.

In fact, given that Vlad was born on March 1st in Georgia, it seems reasonable to believe that it was only the day before that he’d seen his first ever snowscape (Video HERE)

As this intensely difficult year winds down, I’m struck with one dominant thought, something that Vlad’s made clear to me.

Namely, that puppy toys are designed to be destroyed.

They’re akin to the beautiful patterns my barista makes in my latte.

Such things, like Tibetan mandalas, are meant to be admired and appreciated but not to last.

In fact, there’s a wonderful Herzog documentary, The Wheel of Time, that depicts the construction of the Kalachakra sand mandala.

The mandala is an amazing artwork, painstakingly constructed over three weeks, only to be ritualistically dismantled immediately afterwards.

(If you’re curious, you can watch the film for free HERE.)

In a (perhaps slightly) less lofty way, Vlad got his first chew toy from Robbie this week.

As the manufacturer anticipated, my puppy destroyed it completely within the hour.

In less than a week this year will be over.

The dominant question for me is less some version of “What do I want / where do I want to go?” but more “What do I need to let go of in order to succeed?”

What mandalas of thought do I need to deconstruct?

What psychological chew toys have I long ago gutted?

And ultimately, what pretty foamy creations stand in the way of my caffeine rush?

As I mourn the tremendous loss of Joan Didion, I’m passionately rereading her work, particularly her landmark essay “On Self-Respect.”

That remarkable essay HERE changed my life in so many ways.

Yet it was only recently that I learned that Joan Didion wrote it under an intense deadline, given just the title to work with and the required length.

Astonishingly, Joan wrote it not to a word count or a line count but toan exact character count.

In the truest sense of the phrase, to use the currently trendy expression, she understood the assignment.

To achieve the exact character count while writing about character is beyond brilliant, as is her definition of character:

“Character––the willingness to accept responsibility for one’s own life––is the source from which self-respect springs.”

Elsewhere in the essay Didion writes that “people with self-respect have the courage of their mistakes.”

It’s been such a rocky year, rather than endless New Age platitudes, that is exactly what I want for myself (and for you).

Let’s embrace the courage of our mistakes.

Let’s run fearlessly, even joyously, in the Christmas mud.

And let’s recognize that certain things––loyalty and love––are designed to last, whereas other things––sand and latte mandalas, old grudges, and chew toys––serve us best when we simply let them go.

It’s in their destruction, that they serve their purpose.