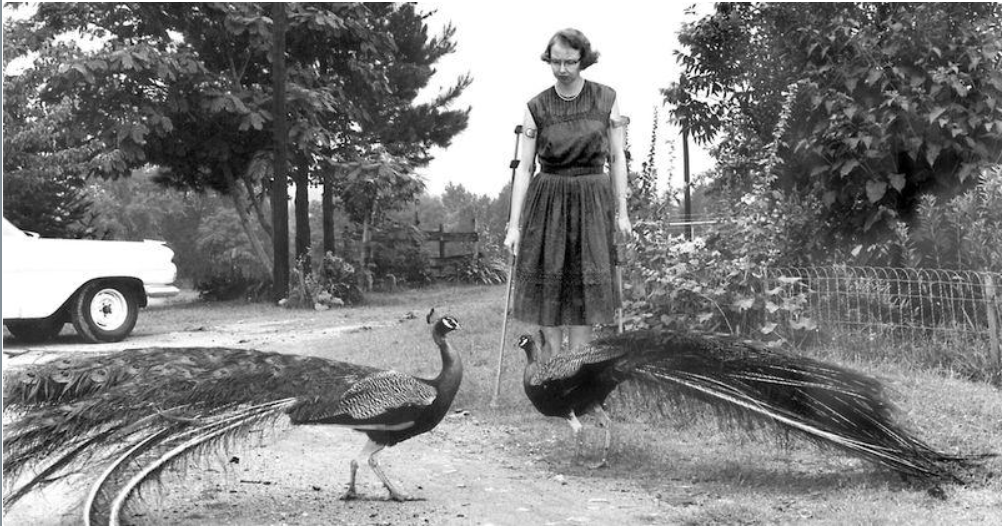 New Meditation of the Month is HERE.

Please tell me if you can relate to this:

“When I was six I had a chicken that walked backward
and was in the Pathe News.
I was in it too with the chicken.
I was just there to assist the chicken
but it was the high point in my life.
Everything since has been anticlimax.”

This is from Flannery O’Conner whose Complete Stories posthumouslywon the National Book Award.

But even so, that sense of six-year-old triumph must have been unbridled.

I feel the same way about my own elementary school triumph.

Although I’ve written before about the ongoing trauma from the kindergarten teacher who put a √- on my report card for reading, commenting that I was overconfident, two or three years later the situation turned in my favor.

After some statewide test was administered, all the students were assigned to specific groups to focus on where they most needed academic improvement.

I was puzzled when my name wasn’t called for any of them.

Finally, my homeroom teacher came up to me and told me that I’d done well enoughthat I didn’t need to be in any of those corrective study groups.

Instead, I could just spend that time freely reading the book of my choice.

Thus, while everyone else was busy mastering long division or learning how to correctly use punctuation, I got to read Chitty Chitty Bang Bang.

For seven or eight-year-old me, this was the equivalent of winning the lottery.

Education and learning have been keenly on my mind lately.

Even after all these years, September still always means “Back to School” for me.

And fittingly, by the end of this month, I’ll be launching two new courses on different subjects and on different platforms.

Yet despite my Chitty Chitty Bang Bang triumph, before I really dive deep into creating something new, I’m often flooded with doubt about whether I have anything valuable to share.

These feelings are always strongest right before I really get started.

(In fact, they are probably the reason most anyone’s creative projects don’t get started, much less completed.)

Fortunately, I know that I’m not alone in experiencing this uncertainty.

There’s a nearly identical version of this quote attributed to everyone from Edward Albee to Stephen King, from Joan Didion to the aforementioned Flannery O’Connor herself:

“I write to find out what I’m thinking.”

Somehow, we think we need to start from a place of certainty, of absolute clarity.

How ironic that to share something truly valuable, we most often have to begin from a place of not knowing.

Extending this further, I find Gloria Steinem’s words on the topic particularly comforting:

“We teach what we need to learn.”

Zen Buddhism has a word for this phenomenon.

Beginner’s mind can be cultivated even when you’re an advanced student or an expert.

It’s simply embracing an attitude of wonder rather than certainty, of openness rather than restriction.

Instead of approaching life from our established, perhaps even jaded perspective, we’re willing to see things freshly.

Therefore, a happy side effect of beginner’s mind is that it inspires feelings of eagerness and enthusiasm rather than boredom and dismay.

There’s something enormously freeing about letting go of all the things we take so seriously, all the beliefs we hold as “Truth” despite their arbitrariness.

Jack Kornfield relates that one of his teachers, Ajahn Chah, would shake his head and smile, saying:

“You have so many opinions.
And you suffer so much from them.
Why not let them go?”

Beyond Gloria Steinem’s quote that “We teach what we need to learn,” I’ve often found that sometimes we teach best from what we’ve struggled with (or are still struggling with).

This week I read an interesting passage in one of my creative client’s book-in-progress where she quoted education scholar Stephen Brookfield.

“The best learners, people for whom learning a skill or subject comes entirely naturally––often make the worst teachers.”

You see, if something comes to us effortlessly, we usually have very little of value to share about it.

Thus, on the other hand:

“The best teachers are probably those who’ve achieved their skill mastery, knowledge, and intellectual fluidity only after periods of struggle and anxiety.”

I know this to be true on a truly visceral level, particularly when it comes to teaching a yoga practice.

I often have little to say about poses I could “nail” on the first try.

The ones I’ve had to approach over time, often taking quite a while to figure out a way into them, are the ones where my experience is the most valuable, my perspective most insightful.

Fortunately, both of my soon-to-be-revealed fall projects are definitely in this category of “slow learning” rather than “instant mastery.”

(Despite my third grade Chitty Chitty Bang Bang triumph, life has NOT been all smooth sailing ever since.)

More and more, I’m sharing from the perspective of hard-won victories, rather than effortless slam-dunks.

And while I may never regain my equivalent thrill of media coverage regarding my backward walking chicken…I’m still looking forward to sharing more of the journey and what I’ve learned with you.

P.S. Again, the new Meditation of the Month is HERE…Enjoy!